Like Liz, I felt the need to try something a bit different today. There were some highs and some lows of tonight’s selections, but it was an interesting smorgasbord! 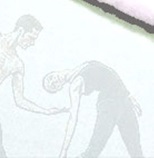 I first went to the Southern Theater to see Gray Matter, a dance performance choreographed by Zoé Emilie Henrot. I usually shy away from dance – not because I don’t like to watch it, but because I don’t have the training to understand what the dancers are trying to convey through their movements. Subtitled “A Contemporary Ballet Exploring the Mysteries of Consciousness” and citing Descartes’ meditations on the mind-body connection as a major influence (including some recorded quotations from his Discourse on the Method as a part of their soundtrack), Gray Matter‘s background material was a very helpful guide to watching Henrot’s choreography. Whether one dancer is becoming another’s puppet, recognizing herself in another, or remaining poised in an impossible moment of suspended animation, there were moments that certainly inspired some philosophical musings of my own. At the same time, however, Hildur Gudnadottir‘s moody music kept a fairly constant tempo. The dancing is way too cool to be boring, but the steady pace meant that choreographic philosophy evolved less than one (with an untrained eye) might expect. I would advise putting Descartes to the side and just relishing the sight of six stunningly graceful and athletic dancers in a choreography that will make you marvel at what human bodies (and minds) are capable of.

Side note: since Gray Matter is just 40 minutes long, I highly recommend stopping off at one of the West Bank’s local food joints for a cheap bite to eat before your next show. You’ll have time to grab some fast food, or if you’d rather shop local, Mapps Coffee and the Afro Deli are right in the neighborhood.

Alan Fessenden in “What if I’m Dead?”

From the subtle to the overt, my next stop was Alan Fessenden‘s What if I’m Dead? at the Mixed Blood Theatre. Fessenden has spent years developing the character of Bartholomew, and he is a talented performer who makes a lot out of what the audience gives him. Though it wasn’t always clear when he was seeking audience interaction and when he was asking a rhetorical question, I get the sense that the more, the better: his improvisations produced some of the biggest laughs of the evening. Unfortunately, it was a fairly small Tuesday-night crowd, and I sensed that Fessenden wasn’t always getting the energy he needed from his audience. He covers some very adult topics, and the more adult his doofy persona gets, the funnier it is. By the second half of the show, I was totally on board with Bartholomew’s journey out of the birth canal and back into it (…well …part of the way). I think a livelier crowd would have given it steam much earlier. Go with a bunch of friends, and start off the show with all the interaction that Fessenden invites you to give him.

The Education of Murray Sanderson.

Since I wanted to end the evening with some dialogue, I went back across the street for The Education of Murray Sanderson at Theater in the Round. The comparison has been made before on other sites, but I’ll say it again: this is essentially No Exit as written by John Hughes. Lock four adults in a middle school classroom, and let the cat-fighting begin. The ensemble (David Kappelhoff, Maureen Tubbs, Courtney McLean, Nate Morse, and Zach Coulter) is spot-on with their timing and absolutely nailed all the posturing, comparing, and self-justifying that seems inevitable at reunions, weddings, and (apparently) endless parent conferences.  Playwright Emily Schmidt is a TV writer in Los Angeles, which may give you a sense of both the good and the bad of this show – the plot is a no-brainer (if you’re familiar with Sartre) and it’s not going to challenge any of the stereotypes that it lampoons. But if Murray Sanderson were on TV, I’d watch it: Schmidt’s witty script and the strong comedic acting combined to make for more laughs than any other show I’ve seen so far this Fringe. Great for unwinding after a long day.

Sophie, Liz, and Melanie will be posting their thoughts throughout Fringe (August 1-11). Be sure to check back as we update with more shows!