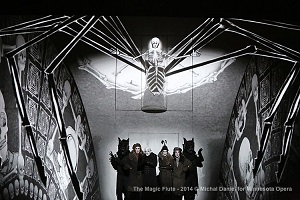 Jennifer O’Loughlin as The Queen of the Night, John Robert Lindsey as Monastatos and Tricia Van Ee, Bergen Baker and Victoria Vargas as the Three Ladies. Photo by Michal Daniel.

by SOPHIE KERMAN
You might think you know what opera looks like: big people in old-fashioned clothing repeating the same phrases over and over. Right? Wrong. The Minnesota Opera‘s production of Mozart‘s The Magic Flute is colorful, dramatic, and surreal. An opera, yes – but not like you’ve ever seen one before.

The Magic Flute is a weird opera to begin with. The first act is a fairly standard fairy tale: Prince Tamino and his dopey (yet endlessly endearing) sidekick Papageno are off to rescue Princess Pamina from the clutches of evil Sarastro and his creepy underling, Monostatos. And then the second act comes around, and Tamino and co. are thrown into a series of Masonic initiation rituals, all with the goal of finally reaching Enlightenment and/or a happy marriage.

In other words, 1927, the British theater company that originally conceptualized this production in 2012 for Komische Opera Berlin, picked exactly the right material to work with. Their aesthetic is a cross between silent films and a sort of avant-garde video game: the characters, in 1920’s-style costumes and pancake makeup (by Esther Bialas and Jason Allen), remain relatively stationary in front of a plain white screen, onto which all of the scenery and movable parts are projected (Paul Barritt designed the show’s incredible animations). The result is an utterly fantastical spectacle that puts an utterly modern spin on an 18th-century opera – but that nonetheless suits The Magic Flute‘s plot to a tee. 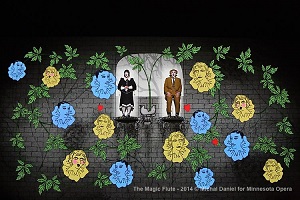 Layla Claire as Pamina and Andrew Wilkowske as Papageno. Photo by Michal Daniel.

It is easy to get distracted by such an innovative approach to staging and neglect the singers; after all, the eye travels towards movement, and the movement is on the screen. I saw the second of two casts of lead vocalists, and I am happy to report that they are beautiful singers and talented performers across the board. Jesse Blumberg plays Papageno with a great sense of comic timing, and Christie Hageman Conover brings a sense heart to Pamina that makes her far more interesting than in any other versions of The Magic Flute that I’ve seen. Tamino is not the most three-dimensional character, but Aaron Blake makes him stand out against the two-dimensional backdrop. Some of the supporting characters also grabbed my attention, particularly John Robert Lindsey as the Nosferatu-like Monostatos. From the performers, my only minor disappointment was in Jennifer O’Loughlin‘s portrayal of the Queen of the Night: she wasn’t quite at the level of command – both in terms of stage presence and vocal precision – that her character requires.

I do have one quibble with the staging. In keeping with the show’s aesthetic, some of the opera’s dialogue has been replaced with silent movie-style captions, using excerpts from some of Mozart’s piano sonatas as old-timey background music. Those sonatas are great on their own, but after the lush orchestration of the opera, one lone fortepiano feels strangely empty and out-of-place.

But these are short moments in an otherwise spectacular production. The Magic Flute is the first opera I’ve seen that I could honestly describe as action-packed; whether you want to convince someone that opera is fun or see a radically new version of an old favorite, you won’t want to miss out on a production like this.

2 thoughts on “The Magic Flute”