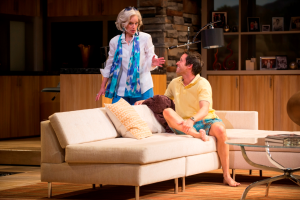 Jon Robin Baitz’s Other Desert Cities is a cunningly crafted family drama set in a plush Palm Springs living room. The play, directed by Peter Rothstein at the Guthrie Theater is superbly acted and written, with powerhouse female performances by Sally Wingert, as Polly, the Wyeth family matriarch, Michelle Barber, as her sister Silda, and Kelly McAndrew as the troubled Brooke Wyeth. Brooke, a suicidal New York writer, returns home and sends a sandstorm through the family Christmas celebration with her soon-to-be published memoir that lays bare family secrets and reveals her lifelong resentment of her mother’s take-no-prisoners style of parenting and conservative Republican values. The men in the family, father Lyman Wyeth (David Anthony Brinkley) and son Trip Wyeth (Christian Conn) hold their own as the voices of reason and neutrality.

This poignant and humorous snapshot of adults in the midst of “thermonuclear family war” is lovingly portrayed, despite the nearly insurmountable  generational and political divisions underlying every interaction. These family members love each other deeply and respect each other grudgingly. Through witty banter, sharp dialogue and harsh truths spoken aloud, they ultimately learn humility in the futility of clinging to the past.