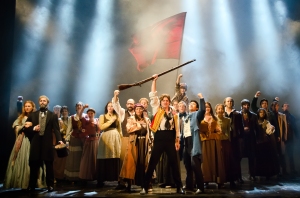 Ensemble, including Cosette (Lauren Wiley) and Jean Valjean (Peter Lockyer) on the left, and Enjolras (Jason Forbach) and Marius (Devin Ilaw) in the center. Photo by Kyle Froman.

Over 60 million people worldwide have seen the powerhouse musical Les Misérables since it opened in Paris in 1980 (the first English-language production was in London’s West End five years later). Les Misérables is the kind of show for which people will buy tickets regardless of the cast, venue, or dates; they just want to see “Les Miz”, no matter what. It’s hard to fault them on this; from Victor Hugo‘s compelling, heart-breaking story, to Claude-Michel Schönberg‘s soaring melodies, to Herbert Kretzmer‘s clever libretto, it’s a moving piece that has enough strength in its structure that it practically carries itself, regardless of the cast.

For long-time fans of Les Miz, the question with this production, which celebrates the 25th anniversary of the show, is whether the new adaptation by directors Laurence Connor and James Powell is as good, or better, than the original version by Trevor Nunn and John Caird.

Telling a complex tale of redemption, love, loss, social injustice, and attempted revolution, the show spans 17 years and the interweaving tales of multiple families, generations, and social classes. The story follows Jean Valjean, who is released from prison after 19 hard years of labour — a punishment for stealing a loaf of bread for his starving niece — and skips his parole to pursue redemption and a better life, only to be followed for over a decade by police inspector Javert. Meanwhile, in Paris, the divide between social classes is increasing, and while the poor starve in the streets, wealthy young students dream and scheme of a revolution to overthrow the greedy government.

Laurence Connor and James Powell‘s revitalization is, for the most part, a success. I hesitate to call it an improvement, per se; I was a diehard fan of the original, but this version is certainly as good, albeit different. It’s a little shorter, running at about 3 hours (including one intermission), which is accomplished through a few cuts and some slightly faster tempos — making some of the lyrics tricky to understand, but the meaning is generally still evident. The set is darker and moodier, incorporating ink sketches of Paris drawn by Victor Hugo, which add a yet more sombre, gritty atmosphere. There are some new technical visual effects that are particularly noteworthy during Jean Valjean’s flight through the sewers, and Javert’s final scene. These may be unnecessary, but they do add a certain “wow” factor, which is nice, particularly now, when one has the option to stay at home and watch the new movie version on DVD rather than braving downtown traffic and forking over $55+.

The cast is lead by a compelling, powerful Peter Lockyer, doing a fantastic job as Jean Valjean, who is ever followed by Andrew Varela as a

captivating, albeit sometimes-hard-to-understand Javert. I’ve always been less interested in Cosette and Marius, the young lovers, than other characters (I find them to be less complex and compelling), but both roles are given strong performances by Lauren Wiley and Devin Ilaw. I was relatively unimpressed with Ilaw until he brought me to tears with his rendition of “Empty Chairs at Empty Tables”, which came across as both mournful and naively confused as to how he has lost all his friends.

The morally suspect innkeeper Thénardier and his wife are always entertaining to watch, as the comic relief and the bad guys you just love to hate, but Timothy Gulan and Shawna M. Hamic do a particularly riveting job. They portray the Thénardiers as gleefully over-the-top, but sly enough to realise that their crooked ways allow them to weather the storm unscathed.

Elsewhere, Jason Forbach is admirable as the idealistic, overconfident Enjolras, leader of the students’ revolution, and Briana Carson-Goodman gives a heartbreaking performance as the Thénardier’s daughter Éponine; her solo “On My Own” is a an angst-filled, rueful acknowledgement of her unrequited love for Marius.

Overall, the increased tempo of the musical may not allow the audience to get fully engrossed in the emotion of the story, but it still sucks you in. The cast is strong, the setting is effective, and let’s face it, it’s Les Miz. It’s worth seeing live, so you can let yourself sink into the experience: despair at the injustice, cheer at the ambition, mourn at the losses, and, indeed, let the beating of your heart echo the beating of the drum.