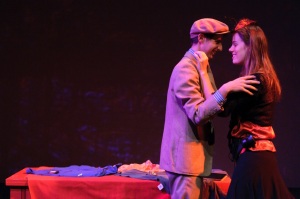 For the the third play in its Center of the Margins festival, the Mixed Blood Theatre Company offers the world premiere of On the Spectrum, an encounter between two young adults who live with different degrees of autism. Written by Ken LaZebnick and directed by Jack Reuler (Mixed Blood’s founder and artistic director), the play explores what happens when Mac (Skyler Nowinski), a “high-functioning” man with Asperger’s, who is applying to law school, meets Iris (Laura Robinson), a “low-functioning” autistic woman who rarely leaves her home.

The advantage of this conceit is that it avoids making one character represent autism, and provides a believable platform for discussions of the differences between their diagnoses. Mac and Iris joke about the expectations they face as individuals “on the spectrum” with a playful banter that is both tender and urgent. Nowinski and Robinson are excellent in their respective roles. Playing Mac with great comedic timing, Nowinski effectively communicates his situation as a twenty-something coming into his own. Robinson’s performance conveys the difficulty that Iris has conversing with others, without letting the role slip into a caricature of a “low-functioning” autistic person.

The truth is that Iris isn’t low functioning at all, but rather functions in an atypical way (she calls people without autism “neuro-typicals”), and interacts with people all the time on-line, especially through a site that she hosts called “The Otherworld.” (Mac and Iris initially meet because she needs someone to enhance the world’s computer graphics, a service which he provides.) “On the Spectrum” does a great job of showing how much Iris’ inner life differs from her outer appearance. Recognizing that it doesn’t need to tell us how to think about Iris, the play simply shows us her various modes and aspects, and allows us to form our own impressions.This strategy prompts reflection about how others with a similar position “on the spectrum”  might function much differently than appearances suggest, but wisely resists making Iris an emblem for all “auties” everywhere.

This nuanced approach carries over into other aspects of the production. Although it explicitly addresses how Mac and Iris deal stereotypes about their diagnoses, as well as how they handle the pressures on them to conform, the play hardly ever comes across as a public service announcement or an after-school special.  Instead, it undercuts these neat simplifications and over-generalizations by deploying humor or delving deeper into Mac and Iris’ development as characters.

For all the charm that these character’s cultivate, it is a bit disappointing that their relationship seems to fit the hackneyed arc of a romantic comedy. It contains all of the genre’s essential moments: the meet cute, the initial starry-eyed phase, the seemingly insurmountable conflict, etc.. There’s even a parental figure who just doesn’t seem to understand. (Regina Marie Williams plays Mac’s mother.) For all the particular challenges that Mac and Iris face, their love story feels thoroughly conventional. Perhaps this conventionality is precisely the play’s point? If so, this point clashes with the often trenchant and funny critiques of conformity that it stages so well.

One thought on “On the Spectrum”