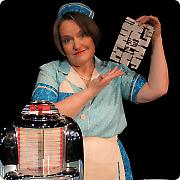 All laughter is both highly personal and intensely social. We don’t laugh much when we’re alone, but the experience of shared laughter can bring a roomful of people together. Mary à la carte, which has just opened at the New Century Theatre after previous runs at the Bryant Lake Bowl, finds this common bond in the notable moments in one woman’s family life – an elderly aunt who boozes it up a bit too much, a family’s feigned ignorance that a relative is gay, a mother’s obsessive labeling of canned goods. While performer Mary Vander Leest‘s family is unconventional, her storytelling is like hearing about a crazy branch of distant relatives: although the characters are sometimes all-too-familiar, they are just kooky enough that we are comfortable laughing at them. In this laughter, Vander Leest encourages a collective embrace of our own families’ moments of weirdness.

The gimmick of Mary à la carte is that guests in the audience are asked to choose items from a diner menu, and each offering – from “Aunt Martha’s Fried Chicken” to “Pineapple Upside-Down Cake” – corresponds to a different anecdote or incident from Vander Leest’s life. The idea is cute, but since Vander Leest gets through all but around four of the menu items in her 90-minute show, I wondered why she didn’t just pick her favorites and make it a chef’s choice tasting menu.

Vander Leest is a charming performer, though, and if her audience participation moments don’t add much to her act, she does tell some good stories. (“Alphabet Soup” was a particular favorite of mine, and it has some truly priceless video footage to go along with it.) Her stage persona does not seem very far from her real-life personality, so the audience feels that they are getting to know a real person who has played some really odd roles in her life (including a year as the Wisconsin Maple Syrup Queen). Though the “Kielbasa” might make the men in the audience squirm, Vander Leest shies away from the overly raunchy; instead, she finds humor in the quirks and missteps of everyday life.

This brand of humor is not going to be everyone’s cup of tea – the majority of the crowd filling the New Century is over 40, and for good reason. Every comic has their audience, and the laughter Vander Leest shares is about a wealth of family experiences that may resonate better with a longer-range view of family dynamics. But for every weird person we all have in our families, we have a moment to bond (or commiserate) with Vander Leest. And if all else fails, she’ll teach you to make some impressive shapes with table napkins.