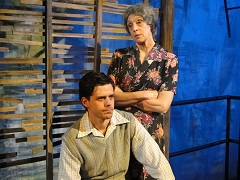 by SOPHIE KERMAN
Good news: Osseo really isn’t that long a trip down I-94. This is good news, because whatever mysterious force drove the Yellow Tree Theatre to set up shop in a suburban strip mall does not prevent the company from putting on downtown-quality theater. In fact, The Glass Menagerie is better than a lot of the theater I’ve seen downtown, which leads me to wonder if the Yellow Tree’s unpretentious locale creates a sort of safe haven for the kind of honest performances that sometimes get lost in the lofty efforts of the urban theater scene.

Given the number of people who have already seen this play or read it in school, simplicity and honesty is exactly what Tennessee Williams needs. The plot of The Glass Menagerie is gloomy enough without pushing it too hard: while overbearing mother Amanda Wingfield dreams only of her painfully shy daughter’s matrimonial prospects, her son Tom is forced to work at a warehouse when what he really wants to do is write. As they prepare to receive a gentleman caller, the portrait of the Wingfields’ absent father – who “fell in love with long-distance” – watches over the action, perpetually posing questions about the promise of adventure and whether escape is ever truly possible.

If the play’s message is a downer, it isn’t at all difficult to watch. Katherine Ferrand is unrelenting as the fretful and manipulative Amanda, but she brings a humor to the role that allows us to sympathize with her ultimate inability to ensure good futures for her children. This is a role that has been played (and probably overplayed) by hundreds of actresses, but Ferrand’s portrayal feels fresh and genuine, highlighting both the tragedy and the comedy of the Wingfields’ situation. In her interpretation of Laura, Carolyn Trapskin presents a fascinating portrait of a woman who is less troubled by her disabled leg than by her crippling social anxiety, and although Tom’s opening soliloquy presents the Gentleman Caller as more of a theatrical device than a real character, Josef Buchel plays the part of Jim O’Connor with an undercurrent of unhappiness that the character’s outgoing, can-do attitude doesn’t quite compensate for.

The character of Tom Wingfield, the protagonist and stand-in for the playwright himself, presents actors with the unfortunate challenge of having to essentially explain away the meaning of the play through a series of poetic reminiscences. Williams’s writing makes it difficult to deliver these lines without seeming either condescending or overblown, yet Jason Peterson manages to be neither, playing the part with conviction and sincerity. If some of his monologues come across as emotionally flat, it is forgivable in contrast to Tom’s barely-restrained anger in his interactions with Amanda and Laura. The character’s later resignation is palpable; it is clear that Tom-the-narrator has lived through quite a bit since the action of the play itself.

The Glass Menagerie carries a lot of historical baggage, both in terms of its 1930’s setting and the play’s long production history. Thanks to director Jon Cranney‘s humanizing interpretation, it is easy for modern audiences to connect with Amanda’s sacrifices, Tom’s yearning for adventure, Laura’s escape into fantasy, and Jim’s boundless ambition (which we sense will not be as fruitful as he hopes). Though sworn urbanites may not believe me, for the next few weeks, there is indeed a reason to go to Osseo.

Still not convinced? Check out the trailer: