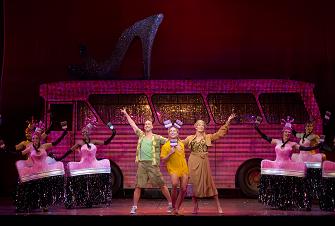 by SOPHIE KERMAN
Priscilla, Queen of the Desert the Musical is the reason why musicals were born. Adapted by Stephan Elliott and Allan Scott from the 1994 movie starring Guy Pearce and Hugo Weaving, Priscilla the Musical takes the film’s original heart and love of glamour, and cranks up the volume, the budget, and exuberance to create a spectacle that takes you out of the January cold and into a marvelously glittery fantasy.

The story of two drag queens and a transsexual on a trans-Australia road trip, all of the glitz is, in fact, grounded in a believable reality that is compelling to watch, even moving at times. Tick (or Mitzi, on stage) has initiated the trip in order to reunite with the 6-year-old son he never met, while Bernadette – a performer of a “certain age” – is launching a comeback tour. As for Adam/Felicia’s personal quest… well, she hopes to give a drag performance on top of Ayers Rock, but really just seems to be along for the adventure.

As the three friends, Wade McCollum, Bryan West, and Scott Willis perform their roles with larger-than-life dynamism and a flair for both sung and lip sync-ed performance that lets us forgive them for their somewhat inconsistent Australian accents. McCollum brings an instantly likable core of compassion and fatherly jitters to the role of Tick, while Willis gives a rich sense of emotional depth to Bernadette, traditionally seen as the most three-dimensional of the trio. Some of Adam’s back story is sacrificed in the transition from screen to stage, but West nevertheless plays the part with a balance that makes his catty retorts sting hard without losing our sympathy for the character.

Priscilla, the bus that serves as the literal and metaphoric vehicle for most of the show’s plot, is a strong stage element, but less of a character in the musical than she is in the movie. Instead, that honor goes to the Tim Chappel and Lizzy Gardiner‘s Tony Award-winning costume designs. The array of hats and shoes, as well as the the sheer size of some of the costumes, is not to be believed, and the transitions from one costume to another are seamless – no small task, with a 15-person ensemble in addition to all of the named characters.

In addition to its over-the-top costuming and main characters that are surprisingly relatable, Priscilla‘s moral, if it can be said to have one, is extremely apt for show business: above all, the musical serves as a testament to the amount of joy and human connection that can be forged just be putting on a great show – and this is a great show. Although idealistic to the extreme, it is undeniably appealing to spend a couple of hours in a world where some sass and a bucket of glitzy pink paint can cure even the most intractable homophobia… at least, as they say in the show, until sunrise.

Priscilla, Queen of the Desert the Musical, by Stephan Elliott and Allan Scott, launches its National Tour at the Hennepin Theatre Trust’s Orpheum Theatre, 805 Hennepin Avenue, Mpls., 55402. January 8-13, 2012.  Tickets start at $39 and may be purchased in person at the State Theatre Box Office (805 Hennepin Avenue, Mpls.,55402, no service fees), online at HennepinTheatreTrust.org or through Ticketmaster by calling 1.800.982.2787.

One thought on “Priscilla, Queen of the Desert”