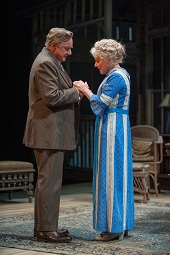 by SOPHIE KERMAN
Though widely acclaimed as an American masterpiece and one of Eugene O’Neill‘s greatest plays, Long Day’s Journey Into Night is not a play that anyone particularly enjoys watching. The story of the Tyrone family’s struggles with addiction, money, and illness, Long Day’s Journey begins on a note of underlying anxiety and ends with the dissolution of trust, family bonds, and hope for a brighter future. Rendered all the more troubling because of the many autobiographical elements drawn from O’Neill’s own problematic family life, this is a difficult play to choose to see, since it is certainly not going to brighten up your evening.

That said, the Guthrie Theater has done an admirable job with the production, and for those interested in the psychology of human relationships, the play delivers in spades. At the center of the family drama is mother Mary Tyrone’s struggles both to keep her morphine addiction at bay and to cope with her family’s mistrust; Helen Carey plays the role with an extraordinary force of will, letting Mary’s facade crack at carefully calibrated intervals that make her descent back into addiction all the more painful to watch.

Although Mary is written as the the hub of the play, we have Carey’s magnetism and Joe Dowling‘s smart staging choices to thank for the electric tension of her scenes. The play is structured like a whirlpool, slowly picking up speed as it spirals further and further down. We often see this reflected on stage, as Mary’s husband and sons rotate to different corners of the room in an uncomfortable orbit around the gravitational pull of her illness. Carey plays the role not as high-maintenance or irresponsible, but as deeply lonely; she wins our compassion to a degree that you might not expect from a morphine addict.

When Mary is not on stage, however, the production loses some of its focus and momentum. Peter Michael Goetz does a fine job as father James Tyrone, a blustery former actor whose miserly ways go from somewhat comic to fairly horrifying; the character is not particularly likeable, but Goetz plays him with balance and a believable hint of the charm that had once made James a box office success. As his sons, John Catron deserves major praise for Jamie Jr.’s powerful alcohol-fueled fourth-act monologue, while John Skelley is a bit flat as the tubercular Edmund. (One gets the sense that his ample successes in comedy do not quite translate to a role with so much unspoken fear and pain.) But it is not any one performance that is at fault for the loss of focus; rather, it is that the three men’s deep connections to Mary Tyrone seem much more fully fleshed out and nuanced than their connections to each other.

Being performed in such a large space, this production also has an interesting sense of distance. With a set by John Lee Beatty that seems to come straight out of a photo of the O’Neill family’s actual house in New London, Connecticut, the play’s realism is certainly not lost in its staging. However, at the Guthrie’s large Wurtele Thrust Stage, the audience seems oddly far away from the action, giving each individual performer an enormous amount of responsibility for drawing us into the drama. Both actor by actor, and moment by moment, it is clear when the ensemble succeeds in building up the play’s gravity, and when they just seem to be rehashing old family arguments.

Long Day’s Journey is a classic for a reason; it portrays the dark side of the American family in a way that many people will be able to connect to – if not directly to the addiction issues, than certainly to the communication breakdowns and the ways that any family can be haunted by its past. The Guthrie’s production is solid, with some truly compelling character work. The evidence of the play’s success is in its sense of timing: though three hours is a long time to watch a family circling the drain, the production rarely feels slow or dragged out. The play itself is not for everyone (and the adult themes probably hard to connect with for those under 18), but if you are willing to put in the time and emotional energy, these performers will not disappoint.

One thought on “Long Day’s Journey Into Night”