“The Legend of Sleepy Hollow.” Sketch by Jim Bakkom.

by SOPHIE KERMAN
Need a break from winter? Step into the Walking Shadow‘s inventive production of The Legend of Sleepy Hollow, a well-timed throwback to the distant autumn days when the leaves – not the snow – crunched underfoot and it was the shivers down your spine, not a feel-good Valentine’s card, that made you sit just a little closer to your date. The stage of the Red Eye Theatre, littered with colored leaves and fallen branches, even seemed to smell like fall as I took my seat; for 90 minutes, I could completely forget about the disgusting weather right outside the door.

The cast of Sleepy Hollow seems to emerge organically from Erica Zaffarano‘s vivid and versatile set. Dressed in faded period costumes (designed by Lori Opsal) that gradually pick up more and more of the leaves from the stage, the ensemble brings the tale to life in a way that feels deeply rooted to its particular place and time.

The legend itself comes from Washington Irving’s famous short story and was adapted by John Heimbuch, director Jon Ferguson, and the show’s original 2010 cast. The story, which takes place in 1790’s New York, is fairly simple: local flirt Katrina Van Tassel is in a love triangle between local tough-guy Brom Bones and new schoolteacher Ichabod Crane. As he begins to court Katrina, Crane mysteriously falls prey to a number of superstitions, including the infamous Headless Horseman, the ghost of a Hessian soldier who rides around at night looking for his lost head. (The implication, of course, is that Brom Bones is just playing a trick on him – but as the local parson wisely points out, whether the legend is true or not, the results are still the same.)

Though the plot is straightforward, like most ghost stories, the fun of Sleepy Hollow is in the telling. The cast works well as an ensemble, with highly stylized movements and choreography that makes it clear that this is a folk tale, not realism. Ryan Lear plays Ichabod Crane with the appropriate intellectual snobbery; though he is a sympathetic character, we don’t really mind when Brant Miller (as Brom Bones) messes with his head. Casey Hoekstra is delightful as Parson Van Houten, a smaller role that is particularly well-imagined, and Joanna Harmon stands out as the beguiling Katrina Van Tassel – despite being styled almost exactly like Helena Bonham Carter in “Sweeney Todd”, she makes the part of Katrina entirely her own. 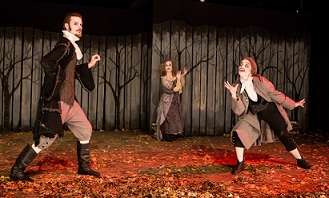 Harmon is also one of the few ensemble members who manages to completely avoid one of the show’s only pitfalls: the dialect. Most of the cast speaks in a heavy New England Dutch accent, adeptly coached by Keely Wolter, and – with very few exceptions – most of the actors do an excellent and convincing job with it. (Given how many bad accents there are in theater, this is a major accomplishment in itself.) No, the trouble isn’t with the execution, it is with the acoustics of the theater: in the Red Eye’s wide space, some of the strongly-accented lines get lost when they are not spoken directly towards the audience. You won’t miss any critical moments, but you will appreciate Harmon’s excellent diction, which never seems to disappear in the unfortunate shape of the room.

A review of Sleepy Hollow would not be complete without mentioning the puppets, designed by Joanna Harmon, which are practically an eleventh member of the ensemble. Without spoiling any of their magic, I will just say that everyday objects are used in ways that are both creative and in keeping with the show’s folksy aesthetic. Director Jon Ferguson has also wisely avoided over-using the puppets and special effects, so that when they do appear, they heighten the drama in fresh and entertaining new ways.

Having grown up just a few minutes away from the real-life Tarry Town, the story of Sleepy Hollow was practically in my backyard, and this production’s immersive design made me feel like I was right back in the middle of a New York Halloween. Given my familiarity with the material, I personally wanted the show to be just a little bit funnier or a little bit spookier – it will make you both laugh and shiver, but doesn’t solidly qualify as either comedy or ghost story. But as an easily-watchable escape from the winter sleet and an utterly entertaining example of well-crafted storytelling, The Legend of Sleepy Hollow is a complete theatrical experience that is sure to please.