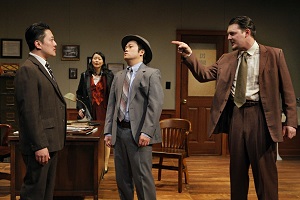 by LIZ PANTING, guest reviewer
As Yellow Fever opens, private investigator Sam Shikaze (Kurt Kwan) walks onto a dimly-lit stage in a fedora and trench coat, jazz music playing lazily in the background, and he turns to the audience and begins to narrate his life. It’s a classic hard-boiled crime drama… with a few changes to the traditional formula. Yellow Fever includes all the genre’s tropes: a mystery, a hard-assed detective in a trench coat, a sexy edge, and wry dialogue; sometimes it exaggerates them just enough to poke fun at the genre.

The biggest thing that makes Yellow Fever a little different than your classic Maltese Falcon or The Killers is in its setting. Playwright (and, as it happens, director) Rick Shiomi set his 1982 play in 1970s in Powell Street, the centre of the Japanese neighbourhood of Vancouver, Canada. The main character, Sam Shikaze, is a middle-aged Japanese man who, along with approximately 22,000 other Japanese Canadians, was shipped off to an internment camp during World War II, as it was feared that they posed a threat to national security. Yellow Fever is set in the 70s; the memory of internment has faded but not disappeared, and the hostility against first- and second-generation Asian immigrants has found a new, perhaps more subtle way to manifest itself.

Sam Shikaze (Kurt Kwan) is hired to investigate the disappearance of the Queen of the Cherry Blossom festival. He is aided by his lawyer friend Chuck Chan (Alex Galick), and Nancy Wing (Sara Ochs), a beautiful Chinese-Canadian reporter. Also lending a hand is Captain Kadota (Eric Sharp), an old friend with whom Sam butts head regularly over politics and the question of how to live life as a Japanese person in a society where most of the power is given to white men – Sam wants to live amongst “his own”, while Kadota wants to integrate into the white hierarchy.

Joseph Stanley’s set design looks exactly as you think it should: Sam’s office is equipped with wooden chairs, an oak desk with a bottle of Scotch in the bottom drawer, and a rotary-dial telephone; the local hangout is a diner owned by Rosie (Jeannie Lander), the neighbourhood gossip and Sam’s stand-in mother. The fast-paced banter flies back and forth while trench coats and fedoras are taken off and put back on again, the good guy is rough around the edges but loveable, the bad guys are vicious, and the mystery of the missing girl unfolds at just the right pace. This play is exactly what it appears to be, and this makes it easy to watch and enjoyable.

The acting is solid. Alex Galick’s Chuck Chan is a slick, smooth-speaking lawyer you just shake your head at, and Sara Ochs as Nancy Wing delivers her lines with perfect timing and does a pretty good femme fatale: aggressive but still unquestionably feminine. Male lead Kurt Kwan stumbles over his lines sometimes, and sometimes seems to smirk while delivering very serious lines, but is still likeable. The audience’s favourite, though is easily Rosie (Jeannie Lander), who has perfect comedic timing and manages to be motherly, gossipy, and flirty all at once.

Yellow Fever’s message is probably not as hard-hitting as it was thirty years ago. It is not obvious why this is. Perhaps it is because it is set in a place far enough away in time and space from Minnesota audiences not to hit particularly close to home. Maybe it is just because there is comedy mixed in with the drama. Or maybe it is because the racism in the play is so blatantly overt and is expressed by bad guys so obviously bad that they may as well be wearing black cowboy hats – nobody could watch this play and think, ‘Yes, obviously they should be beating up that guy because he is Japanese and should go back where he came from.’ Particularly when the “real” Canadian telling the Japanese man to “go home” is speaking in a thick Scottish accent.

Despite this, Yellow Fever has an important message of acceptance, inclusion, and moving forward – putting past transgressions behind us. Mu Performing Arts, the theatre company responsible for this production, aims to illuminate the Asian American experience and did well to choose this piece. Well-acted and well-directed, Yellow Fever is entertaining and easy to watch.

One thought on “Yellow Fever”