The Yellow Tree Theater needs to perform a delicate balancing act. A well-supported community theater with excellent media outreach, Yellow Tree aspires to put on productions that compel metro area theatergoers to take a trip to Osseo. At the same time, their productions should  please their core audience without lulling them into a stupor, a likely possibility when the chairs are as comfortable as those at Yellow Tree (local theaters, take note!). The current production, a brand new musical titled Stay Tuned, contains some gorgeous music but falls flat otherwise. The production aspires towards authentic conversation but ultimately lacks the depth to match its heartfelt tunes. 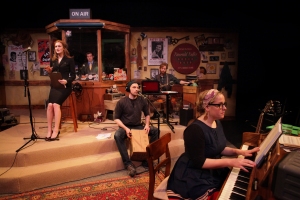 Developed by actors Mary Fox and Andy Frye with local musician Blake Thomas, Stay Tuned focuses on the transfer of power that occurs when a famous radio personality dies and leaves his nasty, profit-obsessed son Gordon in charge of the show. Gordon, played by Ryan Nelson, quickly hires producer Ashabell to modernize the production; an archetypal “city gal”, Ashabell doesn’t understand the charm of the vintage radio show with its live jingles and old school rehearsal process. (Yellow Tree theatergoers might recognize the Ashabell character as a kind of  “prequel” to Rachel Petrie’s character in Miracle on Christmas Lake II.) In opposition to Gordon and Ashabell’s characters are the “three musketeers” of the radio show staff: Rusty (Blake Thomas), Scotty (Andy Frye), and the wonderfully charming Emma (Mary Fox). Despite this simplistic set up, the first act of the play promises some thought-provoking interactions, as all characters are stuck in their ways and someone’s going to have to give.

Unfortunately, the second act doesn’t end up fulfilling that promise. Instead, while Stay Tuned purports to be a play about having “one foot rooted in the world of a simpler time and another rooted in the stark reality that one must always adapt in order to survive,” the show actually skips over the discussion of how to balance those two necessities, and instead acts as an extended parable that elevates the values of a “simpler time.”  It isn’t clear why Ashabell insists on aggressively shaming Emma about her sartorial choices. It’s equally unclear why Gordon hits on Ashabell to the point of sexual harassment; these actions seem a shortcut to symbolize his uncomplicated villainy.

But I’ve gone this far without mentioning the music, and while the characters themselves feel generally flat, there are some seriously good voices in here. The “three musketeers” are simply gorgeous to listen to, and I understand the motivation in creating a show around their warm vocal harmonies. The production allows for a variety of types of music as well, which is fun and breaks up some of the slower moments. If you’re a fan of Blake Thomas or enjoy the nostalgia of old-time radio shows, Stay Tuned might be worth it for the live performances. If not, I’d consider checking out Yellow Tree during a different production.