by SOPHIE KERMAN
There’s a certain mystique out there about fishing, a sense that the long wait (or desperate quest) for a fish can somehow be compared to the various ways of leading one’s life with artistry, impatience, or obsession. The idea has been exploited in various forms for centuries, from “A River Runs Through It” all the way back to “Moby Dick”.

Perhaps it says something about my own character and life philosophy that I have never really understood the metaphor.

I was concerned that this would be doubly problematic for Nice Fish, which is about not just a day spent fishing, but about a day spent fishing on ice. As a general rule, I don’t spend much time thinking about ice fishing, but upon reflection, it is a combination of activity and setting that strikes me as both boring and cold (and speaking of metaphors for life, these are two of my least favorite states of being).

It was lucky, then, that the big name of two-time Tony Award winner Mark Rylance (who both stars in, co-wrote, and co-directed the play) got me to face my prejudices and head over to the Guthrie for an evening of theater infused with a degree of warmth and humor that I would not have thought possible in a 2 1/2-hour play set on a frozen lake. 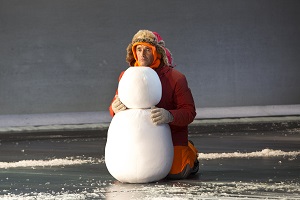 The play is constructed around poems by Louis Jenkins, whose philosophy seems to mesh seamlessly with that of Rylance and co-director Claire Van Kampen. As an artistic team, they find humor in bizarre juxtapositions of everyday imagery and pauses at just the right moments. The trio pulls beauty out of unexpected situations and deep philosophy in the most mundane, fleeting comments.

The camaraderie of Mark Rylance and Jim Lichtscheidl, as the pair of fishermen, keeps the play at a perfect balance; they perform so smoothly, and everything is done so naturally, that you almost don’t notice how incredible the two of them are. (Bob Davis also deserves a special nod for his hilarious scene as a rules-obsessed DNR officer.) The entire production, acting included, is done in such an understated and nuanced way that I would have expected to see the play in a smaller venue, rather than the Guthrie’s McGuire Proscenium Stage. As it is, Todd Rosenthal‘s beautiful set design uses an enhanced sense of perspective to keep the actors from seeming too far away.

Nice Fish takes an unexpected turn when it brings Norse mythology into the mix; what began as simple and meditative becomes both darker, wackier, and oddly surreal. Despite fine performances by Emily Swallow, Chris Carlson, and Tyson Forbes, audiences may find the shift unwelcome for the simple reason that it pulls the action away from Rylance and Lichtscheidl’s natural chemistry. (A glance at the Wiki for Freia’s abduction in Das Rheingold will at least help with the Norse references, since the program note may be more confusing than clarifying.)

Personally, I enjoyed the weird introduction of a goddess and a giant into the serene world of the ice; if nothing else, it enables some of the play’s later revelations, including a charming and poignantly comic last scene. And as I watched, turning over the play’s message and structure in my mind, I had a revelation of my own: Nice Fish is nothing less than the Waiting for Godot of ice fishing, punctuating life’s long (and sometimes apparently senseless) wait with moments of reflection, physical comedy, absurdity, profound sadness, and startling delight.

Ice fishing as life metaphor. I suppose I might be a convert after all.