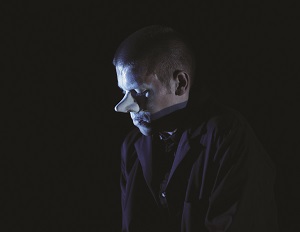 by SOPHIE KERMAN
In the artistic process, from the initial spark of an idea to the final performance of a show, a lot can go wrong. Moon Show 143, in a limited run at the Guthrie’s Dowling Studio, began as an intriguing idea: an exploration of humankind’s relationship to the moon. Adding puppets and an electronic soundtrack to our millenia-old fascination with the moon sounds like an exciting – if somewhat trippy – way to get out of our own skins and travel into the cosmos.

Somewhere between concept and execution, however, Moon Show 143 becomes a bewildering mess of lights, fragmentary puppet bodies, and over-long scene transitions. The show is presented in four sections, with the show’s writer Kyle Loven starring as both puppetmaster and moon. Although each of the four parts is clearly meant to portray a different perspective on the moon, all of the momentum dissipates, both between and within sections, as Loven needlessly dons different gloves, socks, or wigs while simultaneously managing an array of puppets. If Loven moved less awkwardly, he might be able to hold our interest during these transitional moments, but as it is he just looks like a teenager teaching himself how to pop and lock from a YouTube video.

While Loven moves through his disjointed narratives, Paurl Walsh mixes pre-recorded sound effects and live samples in ways that ought to be effective, but even a strong musical glue wouldn’t be able to hold this bizarre collage together. Amiya Brown‘s lighting design is cool, with a rock aesthetic that fits well with the music, though it does not contribute much to the slow-paced thematic progression.

For an hour-long show with so many interesting elements, I was frankly shocked at both how boring and how confusing it was. But what really did it for me was the show’s culminating moment. Seated atop the metal structure that serves as the primary scenic element, Loven slowly and fumblingly peels the skin off a female puppet to reveal her glittering puppet stuffing, which he lays down in a resting position… and then proceeds to drape the puppet skin over the rail of the metal structure, head hanging down, so that for the show’s final few minutes, all we can really pay attention to is a sad, hollow, upside-down husk of a puppet.

Brutal, nightmarish, and distracting, but nevertheless the most vivid moment in an otherwise baffling evening.