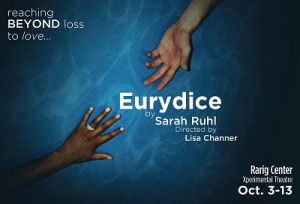 Orpheus is one of the great boneheads of literature; a man who just cannot follow directions.  A musician and poet, he falls in love with Eurydice.  At the wedding celebration, she dies (in the original myth, she’s chased by a satyr and falls into a nest of vipers) and ends up in the Underworld.

Orpheus, brokenhearted, finds his way there and is able to charm Hades with his music.  Mr. H, the big cheese, provides idiot-proof instructions on how to bring Eurydice out of the Underworld.   Eurydice will follow him out of the Underworld.  All he has to do is not look back until they reach the upper world.  That’s it.  No twelve trials of Heracles.  No spending most of the year in the Underworld Persephone-style.  Just don’t look back, Orpheus, and all is as it was.  Spoiler alert: our imbecilic pandouris player looks back.  Yep. We’re supposed to feel sorry for him while she has to go back to hell.   I’m not so disappointed when he’s finally taken out by the Maenads.

Sarah Ruhl’s retelling of the myth from Eurydice’s perspective is fresh and welcome.  This Orpheus is a bit self-absorbed and not the best listener.   But Eurydice loves him so who are we to judge.  The woman playing Eurydice (there was no program for the performance of Eurydice I saw so I’m unable to give the student actors their due credit) finds her stride when Eurydice arrives in the Underworld via rain-filled elevator.  With her empty suitcase and elided memory (taken away by a dip in water on the way between worlds), she meets her father but does not remember him.  Eurydice’s tabula rasa is played poignantly.  The developing connection between father and daughter, and recovering of memory is portrayed persuasively.  The actor is at her best in these scenes.

Eurydice’s father (Nathan Tylutki) died some years before and desperately tried to hold on to the memory of his daughter, writing her letters from the Underworld with the faith that somehow those missives would push through earth to find her.  Tylutki plays the father convincingly as a grief stricken Atticus Finch.  In a three piece suit and graying hair, Tylutki is transformed into a man twenty years older.

I often think that the hands give away an actor.  There is a moment midway through the production when the father is creating a room for Eurydice from string.  The unconsciousness deftness with which Tylutki handles the jack knife, cutting away segments of string suggests a man from another time handling a tool he’s carried since childhood. In that instance, the immersion into character feels complete.

Director Lisa Channer (co-founder of Theatre Novi Most) makes excellent use of the Nolte Xperimental Theater.  The upper world interactions take place on a catwalk elevated above the floor on two sides.  The Underworld resembles a decrepit boiler room, all leaking  pipes and receptacle buckets.  Eurdyice’s father’s letters decay in large piles.  A percussion and string trio provides an ephemeral soundscape, both subtle and expansive.

And then there are the stones.  The stones are magnificent.  The costuming is exceptional – a strange Dust Bowl grayness with bold headpiece protheses.  The three actors, a chorus of inertia, move perfectly.  As if great weights were attached to their limbs and withering winds slowed them, the actors progress across the stage in a wonderfully staggered choreography.

Orpheus and the king of the Underworld are less formed and solid.  The actor playing Orpheus stretches the artistic nature of the character to a restless flakiness.  At times it seems like the actor is pushing lines at Eurydice and performing Orpheus, instead of working to co-create the lovers’ relationship.  The king of the Underworld moves from menacing and delightful eccentricity in the first half of the production (when he is courting and coercing Eurydice in the upper world) to distracting farce in the Underworld.  A caricature on a tricycle, the king is stripped of menace.  The calculating version above ground is in confusing tension with the id-driven juvenile below ground.

But the end is the same. Orpheus doesn’t learn and Eurydice is returned to the Underworld.  Only now, both she and her father are deprived of memory, history and connection.  Maybe the lesson is to never date a musician or poet.