In some ways it is unfortunate that Diana Son’s play Stop Kiss is as relevant today as it was when it was first performed in 1998. Fourteen years later, and it is still not unthinkable that a person be attacked and beaten for being (or even just appearing to be) LGBTQ. And yet the very fact that this sort of hate crime still happens means that this play is still important. 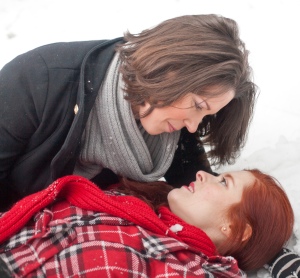 The very small but very enthusiastic theatre company Fortune’s Fool Theatre chose this play because, in director Ben Layne’s own words, it is about “the important, hard work of love”, and because “real love means holding on through the tough stuff, and that’s something anyone can relate to”. Indeed, Stop Kiss isn’t an epic tale; it’s the very small-scale story of two women who meet, become friends, and then find themselves unexpectedly in love. When one of them is brutally beaten, the other is left waiting and wondering about what could have been and what will be. It isn’t a complicated story, as far as plot goes, but it is incredibly easy to relate to. Who hasn’t, at one point in their lives, worried about being rejected, wondered if it was “true love”, or been surprised to find love unexpectedly?

Son’s script is well-written and poignant, never using more words than needed — she tells a lot of story in under two hours (no intermission). The story is told in parallel, moving between scenes post- and pre-attack, which places the violent act both at the beginning and the end of the play, without ever really focusing on it. It creates an incredibly bittersweet experience for the audience; you want the characters to figure it out and get together, but you don’t, because you know what will happen if and when they do. If there is any problem with this storytelling technique, it is just that it is difficult to stage, and results in a lot of scene and costume changes. The story is beautiful, and set designer Ursula K. Bowden has created a very efficient and flexible space, but even so, the constant pauses leave the audience watching an empty set for too long, for too often.

Lead actors Ariel Leaf (Callie) and Katie Starks (Sara) both do really good jobs of creating characters who are wonderfully human. They fidget, they stammer, they try and fail to hide their emotions. A couple of lines were flubbed, but nothing big enough to snap the audience out of the story. While Leaf (whom local theatre fans may recognise from her one-woman Fringe hit “Died in a Trailer Park, Woke up a Mermaid”) and Starks have by far the most stage time, minor characters flit on and off stage from time to time to round out the world of Stop Kiss — Joel Raney is an easily-disliked Detective Cole, the police officer who implies but never openly says that the victim had it coming since she was being so provocative as to kiss another woman in public. Here, again, is a sobering reminder that some things that should have changed by now haven’t — victim-blaming is still prevalent of cases of sexual assault and domestic abuse.

Overall, Stop Kiss is a touching, well-performed play that provides its audience with several important reminders: love is surprising, wonderful, and takes work. Hate crimes are tragic and, alas, still very real. And there was some great music in the late 1990s. It’s a small company in a small space, and it isn’t the smoothest production in the world, but it’s got a really big heart.