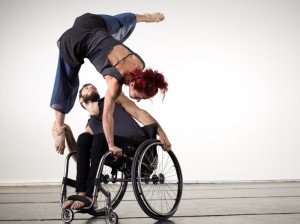 On Friday, March 21, one of the world’s most innovate dance ensembles will be performing at the Ordway Center for the Performing Arts.  Under the artistic direction of Judith Smith, AXIS Dance Company “challenges the possibilities of movement.” Founded in 1987, they have paved the way for a powerful contemporary dance form called physically integrated dance.

The company of seven dancers – with and without disabilities, will be performing “what if would you” by Victoria Marks, “Full of Words” by Marc Brew and a new work by Amy Seiwert.

Through outreach programs, AXIS brings physically integrated dance outside the studio and into schools, community centers, independent living centers, and to countless organizations seeking to learn more about dance, disability and collaboration.

AXIS Dance Company.  Presented by the Ordway Center for the Performing Arts. March 21, 2014. Information at http://www.ordway.org