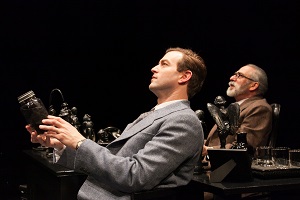 by JAMES JOHNS, guest reviewer*
Described as a play of “what if” by director Rob Melrose, Freud’s Last Session imagines a conversation, bordering on debate, between Sigmund Freud and C.S. Lewis as they struggle to understand each other’s positions on logic, faith, and the existence of God. An older atheistic Freud, suffering from late stage oral cancer, requests a meeting with C.S. Lewis, a prominent literature professor and born-again Christian. While Freud seeks to understand how a man as intelligent as Lewis could deny logic, and change his position from reason to religion, Lewis in turn shares his conversion experience, asserting there is as much logic in Christianity as there is in atheism. Though these intellectual titans have a reputation for being difficult to follow, the play presents their epistemological positions as not only understandable, but also entertaining to consider.

In a particularly intriguing stage configuration, Michael Locher’s set is positioned in the center of the rectangular space, with the audience along the long edges of both sides. Described as a ‘boxing ring’ or ‘anatomical theater’, this positioning gives the audience the opportunity to witness the action while being reminded that the answer(s) to the questions being presented are relevant to everybody in the room. Lighting Designer Frank Butler places lights in the floor and in the ceiling, evoking the idea of heaven and hell in a subtle reminder of the theological issues at stake.

Robert Dorfman delivers an impassioned performance as Freud, portraying the aged and ill psychoanalyst as intellectually vibrant despite his physical ailments. Though impressively played, Dorfman’s use of shouting to emphasize Freud’s points is occasionally excessive. Freud’s arguments are potent, and hammering them home by yelling at a calm and cordial C.S. Lewis seems unnecessary. Peter Christian Hansen plays C.S. Lewis with spirit, and portrays Lewis as an approachable, intelligent, and compassionate man. Hansen’s playfulness comes through on stage as he appears to enjoy engaging in the philosophical debates, while also bringing to life Lewis’ friendliness and genuine interest in others.

Tom Hegg’s portrait of a radio announcer delivering devastating news of the Nazi advancement and subsequent death and destruction is spot-on. Though a tertiary party to the storyline, Hegg’s character – along with Freud’s and Lewis’s heated discussions of the Nazi invasion of Poland – presents the audience with the opportunity compare the civilized discourse of Freud and Lewis to the uncivilized advancement of the Nazi agenda. Playwright Mark St. Germain may be challenging audience members to find ways to respectfully talk about God’s (potential) existence in ways that allow for discourse, versus using an onslaught of power to overwhelm and forcibly convert others.

Freud’s Last Session is an interesting and powerful play that presents us with a range of arguments between polar opposites. With its engaging exploration of such hotly-contested topics as war, peace, God, rationality, morality, and mortality, audience members will undoubtedly have a lot to talk about after the show.

One thought on “Freud’s Last Session”