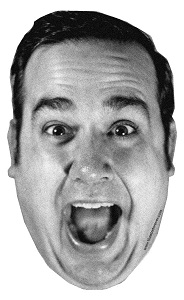 by SOPHIE KERMAN
How many ping pong balls can you pick up in 30 seconds? In 15 seconds, can you come up with 5 different things that you’d like to put in a mailbox but probably shouldn’t, because you’re pretty sure it’s a felony? Game shows are weird, unpredictable, and completely arbitrary, and this might be why we like them so much. They seem to reflect a sort of existential uncertainty: sure, we can all sweat it out for 30 years hoping for a big break, but when disaster could wipe away all our hard work at any moment, it is somehow comforting to leave it all up to random chance from the outset.

That is the premise of Theatre Forever‘s The Big Show, which turns a game show into the setting for its host’s final reckoning with his own life and mortality. The idea that nobody can predict what’s behind the big, red curtain (and that nobody chooses the mysteries beyond over a guaranteed sum of money) isn’t exactly a new or surprising metaphor, but the actors certainly have fun with it. Playing stagehands, contestants, and figures from big-name host Jackie Cartwright’s past, the seven-person ensemble – who created the show under the guidance of director Jon Ferguson – populates a vaguely surreal universe where flashbacks meld seamlessly into the action of Jackie’s very last episode of The Big Show.

Clocking in at around 60 minutes, this performance has the feel of a really excellent Fringe show: new, weird, funny, and a bit rough around the edges. Ferguson presents it as a work-in-progress, and there are moments when the artistic message of the show could be a bit crisper. For instance, The Big Show‘s dark undercurrent might be brought into greater relief: the odd choices that it offers its contestants are intriguing and could be used to more unsettling effect.

I am sure that my desire for a greater twist of the knife comes from the fact that the show – whether intentionally or not – brought to mind the kind of heightened reality, understated comedy, and bizarre showmanship that you see in David Lynch’s Twin Peaks or Mulholland Drive. In its best moments, The Big Show‘s characters are just a little bit weird, its world turns around a slightly different axis, and the questions it asks are just the right balance of obvious and unnerving. After all, when offered $1,000,000 or a big red curtain, would it be brave or foolish to venture into the great unknown?