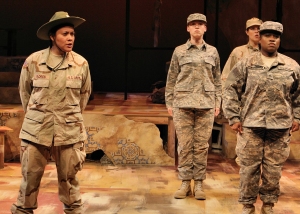 By LIZ BYRON As a self-identified pacifist and feminist, I was interested in the prospect of hearing women soldier’s perspectives on the war in Iraq. And as I’ll admit that my knowledge of life in the US armed forces is very much limited to major news headlines and Hollywood blockbusters, I was hoping that History Theatre‘s production of Lonely Soldiers: Women at War in Iraq would give me some insight as to what it’s really like: why do different women enlist? What are their day-to-day experiences? Would they re-enlist? What happens when they come home? Well, the play certainly delivered, with so much food for thought, I’m still digesting a day later. That said, I’m not sure it’s a great play — but I’ll get to that.

Lonely Soldiers is one of two plays being performed at the History Theatre throughout March. It’s being shown in rotation with The Things They Carried, a one-man show about the Vietnam War. In contrast with Things.., Lonely Soldiers deals with a much more contemporary aspect of the US military. Based on Helen Benedict’s non-fiction book of the same title, Lonely Soldiers tells the stories of multiple women soldiers who served on the frontlines during the early years of the Iraq war.

Starting with the tales of how and why they enlisted — many of them requiring parental waivers for enlisting under the age of 18, and many of them joining as a desperate means of escape from unpleasant living situations — the play goes on to explore their arrivals in Iraq, their day-to-day lives while deployed, the trauma they experienced on the frontlines, and then the struggles they faced returning to life in the USA. Most of their stories are not cheerful ones; the audience hears of sexual harassment and feelings of alienation, and of sexual assault blamed on the victim and covered up by higher-ranking personnel. We hear of confusion as to the goal and the outcome of the Iraq War, poor management, and contradictory orders, not to mention violence, loneliness, and extreme alienation upon returning home.

Under the direction of Austene Van, and following a stage adaptation by the book’s author, the “play” is less a play, and more a series of interwoven monologues. Although the entire cast of 8 is on stage at the same time for the majority of the performance, there is minimal interaction between characters; rather, each soldier takes a turn speaking in the spotlight, while the rest dwell in the background. While the stories all follow roughly the same pattern (enlistment, deployment, return), each soldier’s experience is different, and it’s valuable to hear multiple perspectives. On the other hand, it was occasionally difficult to keep separate characters’ stories straight, and it felt odd to call this a 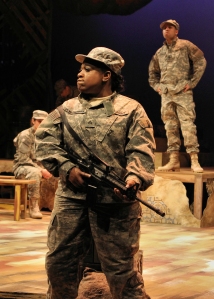 “play” rather than a dramatic reading of a nonfiction book.

A colleague once said, while writing a book review of a first-hand account of the Holocaust, “It seems like you shouldn’t critique the writing, when the subject is what’s important.” And yet, it’s frustrating when an important message gets blurred by poor presentation. Lonely Soldiers doesn’t suffer from poor presentation, but theatrically speaking, it isn’t fantastic. But does that matter? Once the house lights came on after the show (an easy 90 minutes, by the way), I had only vague impressions of the staging (quite good), the set (simple, and the better for it), the lighting or costuming (no complaints), or even the acting (good, if uneven; Jameca Bennett as Terris Dewalt-Johnson, Tamara Clark as Clara Henderson, and Rhiana Yazzie as Santiaga Flores gave particularly compelling performances). The vast majority of my thoughts were on the subject matter; wondering how and why the military manages to cover up so much abuse and harassment, wondering how many soldiers in the Iraq War came home with the same negative view of the military and aforementioned war, wondering what it would take for military life to improve for women, and wondering, most of all, how someone could hear any one of these stories and ever want to join the military. I was, in fact, surprised at how anti-war and anti-military this piece was.

Ultimately, this may not be the best piece of drama out there, but it is certainly compelling, and has a lot of important things to say that I believe more people need to hear.

16 thoughts on “Lonely Soldiers: Women at War in Iraq”