“Be regular and orderly in your life, that you may be violent and original in your work.” Clive Barker 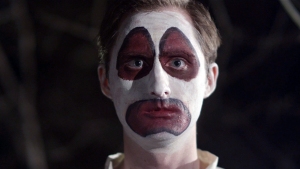 Perhaps knowing that Barker is regular and orderly in life is a relief (or a consolation). After experiencing Crazyface, I’m imagining him in a rocking chair sipping tea as the sun rises, maybe a pan flute playing softly in the background. The play is definitely violent and arguably original.  It is also strange and confusing.

Fans of Clive Barker, famous for his horror fiction and film (Rawhead Rex, Candyman, & Hellraiser), will recognize themes and imagery that have been through lines in his work. Director Paul von Stoeztel is an enthusiastic fan, with Barker tattoos on his arms.  And Shadow Horse Theatre has staged a well directed, wonderfully acted and inspirationally costumed production of a deeply flawed work. The play is an early work of Barker’s with decidedly mixed reviews.

Originally written as three plays in 1996, Crazyface suggests a dark bible of influences including William Blake, Edgar Allen Poe, the Marquis de Sade, and Hieronymus Bosch. The work is a lurid picaresque following the adventures of simpleton named Crazyface (based on Tyl Eulenspiegel, an impudent trickster figure from Middle Low German folklore who inspired the 1895 Richard Strauss tone poem). Crazyface sees angels and sidesteps calamity through both foolishness and improbable cleverness.

Like the folk stories of Tyl Eulenspiegel, Crazyface is structurally a collection of loosely connected episodes.  20 actors play 50 roles in scenes that include an aging Icarus dying under wooden wings, international intrigue, the Spanish Inquisition, talking horses, pig farming and castration, and necromancy (I included the list of cast and crew below; the performances and staging are excellent). There is no lack of spectacle, and many of the set pieces are entertaining. But the text often undercuts horror and tension with a goofiness.  The modes of farce don’t fully work, diminishing the impact of the truly tragic and awful.

Clive Barker’s creations are often explorations of the carnivalesque (as defined by Russian critic Mikhail Bakhtin as an artistic mode that subverts and liberates the assumptions of the dominant style or atmosphere through humor and chaos).  He brings unlikely characters together, welcomes unacceptable behavior, looks to unite that which is usually separate (heaven and hell, good and evil, madness and sanity), and celebrates the sacrilegious and ritualistic. Barker is also interested in violence, depravity and the amoral as a path to knowledge. These themes are more developed in his later work, but are present in Crazyface.

Lenny, brought back from the dead, is the homicidal doppleganger to guileless Crazyface. The evil cleric Mengo is offset by the Angel. Magic and salvation are offered then snatched back.  Masses die as mid-level functionaries of the 16th century world powers bargain and joke at mystical crossroads.  Though sometimes heavy-handed or muddled, the scenes are never boring.

Crazyface is provocative and possibly a mess. But von Stoeztel’s production of the weirdness is outstanding.  Somewhere Barker is rocking with a glass of tea and a smile on his face, his mind a tornado of violence and chaos.