By REBECCA HALAT. Blending humor with anxiety, Theatre Unbound’s production of Motherhood Out Loud showed many of the complexities of motherhood. What’s left to be said about motherhood, you ask?  True, a play on this much-discussed subject risks redundancy, and yet throughout the performance, I felt fully engaged.  Set through a series of scenes that takes the audience from the birth of a child to adulthood, the play shows different methods, meanings and experiences of mothering along the way. 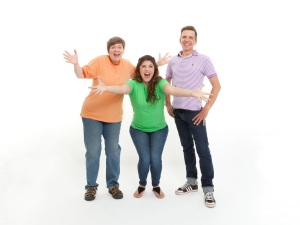 While many of the scenes did depict fairly predictable maternal situations, they were performed with humor and a lightness that made fun of “Mom” while still completely respecting the hard work she puts in every day.  The ensemble cast, comprised of Charla Marie Bailey, Shana Berg, James Lekvin, Stacey Poirier and Renee Karen Werbowski, played well off of each other.  They transitioned seamlessly from scene to scene, each taking on new characters easily, whether playing a parent, a child, a teen, or even an adult child.  Their performance is what added variation to a well-covered topic.

The scene that surprised me the most, and to my mind had the freshest take on motherhood featured James Lekvin as an adult child.  Lekvin’s character was returning to his mother’s home after his own divorce, only to find her aging and in need of his care. We as a culture talk of mothers of young children frequently, but once children have left the home, had marriages and lives of their own, the mother seems to vanish. This scene showed that she does not disappear, but in fact, the roles often reverse, and she is the one now in need of care.

Overall, the scenes portraying motherhood within the context of older children were the more interesting sections of the production because they showed motherhood outside of the perspective that we usually see in pop culture.  Typically, when the media does portray the mother of an older child, she is nagging and intrusive. While this version was depicted, it was only part of the picture.  In the end, the audience got to see the complexity of the mother-adult child relationship, one that can be significantly more difficult to navigate the mother-child version.

The broad variety of motherhood-related subjects covered in this performance ranged from giving birth to adoption to teen dating to an interview with a great-grandmother.  While the script did manage to cover significant ground, there were some glaring omissions that would have added complexity and realness to the message.  There were no mentions of Cesarean births or the varying ages of new mothers.  Also absent were discussions of more in-depth discussions of birth control and abortion, which, though serious, certainly speak to a motherhood of choice vs. that of necessity.  While birth control and abortion are not typically associated with motherhood, but rather are seen as only related to childlessness, they are incredibly relevant aspects of when and why one becomes a mother.

I appreciated the way in which this production was able to take such a serious subject and balance that seriousness with humor. Particularly apt at this was actor Stacey Poirier, whose comedic timing and physical presence had a way of driving humor within her scenes.  The entire cast was exemplary, and Poirier stood out.

Motherhood Out Loud offers some predictable and unpredictable, as well as hilarious and devastating, interpretations of motherhood.  I definitely recommend it overall, with the reminder that as the play progresses, the aspects of motherhood become more complex and engaging.