By LIZ BYRON. I remember being wildly unimpressed the first time I read The Misanthrope. I was a college sophomore taking my first French literature class, and my impatient 19-year-old brain thought it was slow, wordy, and didn’t particularly seem to have a plot. A few years later, I re-read it for a graduate class and found it to be a nuanced story featuring well-developed characters trying to figure out who they are and how to interact with the rest of the world. 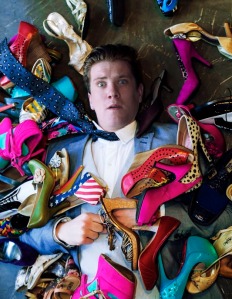 Sam Pearson stars as Alceste in The Misanthrope, playing January 2-17 at the Bryant-Lake Bowl in Minneapolis. Photo by Jane Ojile.

What I’m getting at, is that The Misanthrope is more about the characters than the plot, and director Adrian Balbontin does a good job of translating this into an interesting viewing experience. Part of it is the setting – in a clever move, this production is set in the heart of modern-day New York’s fashion scene, rather than in the 17th-century court. This works particularly well as a lot of the problems of the latter seem to also plague the former: false flattery, gossip, backstabbing, and raging insincerity. The script is based on a translation by Robert Cohen, which sticks to the original rhyming format, but renders the language modern and accessible (and, you know, it’s in English, which is also helpful).

As far as adaptations of what some may call a “stuffy old play” (yes, guy in the row in front of me, I’m quoting you!) go, this is a good one. The story feels relevant, the script feels fresh, and it maintains one of my favourite parts of the play: the ambiguity. Some productions portray Alceste, the titular misanthrope, as a good guy whose only fault is that he refuses to “play the game” and indulge in insincere flattery just to make life easy. Others show him to be a jerk who just hates everybody around him for no good reason. The script leaves it open to interpretation, and so does this production. Will you feel sorry for the man who is hated for having the guts to say what everyone is thinking but nobody is saying? Or will you want to smack him for being so rude instead of just smiling and nodding? Or, like me, will you feel a little bit of both? It’s really up to the viewer to decide, as Balbontin‘s production plays up both the sympathetic and the unsympathetic sides of the characters.

So, if you don’t happen to be a French literature buff, The Misanthrope is a “comedy of manners” written in rhyming couplets by French playwright Molière (frequently hailed as “the French Shakespeare). The play, which had its début in Paris in 1666, is set at the French court, where a man named Alceste gets in trouble for refusing to play the games of flattery so common among the gentry. Alceste pretty much hates everybody, except for an overly flirtatious woman named Célimène, whom he adores despite the fact that she represents everything he hates.

As far as the performance, the cast is pretty strong. Sam Pearson gives a solid performance as Alceste; a little understated, and at times he seemed to weaken under the weight of his lines — seeming sometimes to emphasize the rhymes more than the meaning behind them. But when it came to moments of strong emotion, he absolutely shone. Devon Cox was entertaining as the attention-loving Célimène, and also managed to be at times relatable and sympathetic, and at others, vapid and cruel. And let me not forget to mention the colourful characters that fill out the play — my hat’s off to Todd O’Dowd for his entertainingly over-the-top performance as Oronte, and Pegeen Lamb‘s haughty Arsinoë. Anni Jordan-Amberg stole my heart with her portrayal of an awkard, idealistic Eliante (although I never really did buy the play’s early claims that she is in love with Alceste; if she’s in love at all, it’s with the idea of love!). No complaints about the rest of the cast, either.

The one part of the staging that I didn’t love was what I found to be an excessive amount of movement. While it is common practice for characters in a play to move around frequently, there seemed to be a particularly high level of pacing, circling, and whirling around — a fact which was only emphasized by the bare stage. On the other hand, I really appreciated the lack of props (not that there would be room for many; the Bryant-Lake Bowl‘s stage is fairly tiny) as it put the attention on the story.

At 90 minutes, this is a fast-paced production; each of the five acts top out around 15 minutes long, with a live band on stage playing music in between sets. I’m not sure the music tied in especially well with the play and its setting, but the music itself was great and having the band on stage with the actors was cool to watch. Things never slow down enough to get boring, but don’t quite hit the frantic level. It probably won’t change your life or cause any massive revelations, but it is well-staged, accessible, and entertaining — and worth your time.

PS – in case you aren’t familiar with the venue, the Bryant-Lake Bowl theatre serves beverages (alcoholic and non) as well as a full dinner menu, with table service throughout the show.

The Misanthrope by Molière, produced and directed by Adrian Balbontin, plays at the Bryant-Lake Bowl Theatre at 810 W. Lake Street, Minneapolis. Show runs January 2-17, 2015 with performances on Thursday, Friday, and Saturday nights. Tickets $10-15 on a sliding scale, available at www.bryantlakebowl.com or by calling 612.825.8949.