By LIZ BYRON. When a play has been performed regularly across the country for 79 years, and has spawned an Oscar-winning film version, it seems safe to assume that it’s got some pretty good things going for it. Indeed, You Can’t Take It With You is a charming and clever story with a witty script, and the Jungle Theater‘s production features a cast that is every bit as talented as the story is entertaining (that is to say: very).

The play, written by George S. Kaufman and Moss Hart, tells the story of an eccentric New York City family: three generations living under one rambling roof, each member with their own unusual hobbies (dancing? Making fireworks in the basement? Writing plays? Playing the xylophone? Check.). The drama arises when the most “normal” of the clan, Alice, falls in love with Tony, the only son of a very rich, very conservative man. The families are very different, and when they finally meet, hijinks ensue.

With two intermissions, it’s a long play for such a light story, but director Gary Gisselman keeps things moving at a brisk enough pace to keep it from dragging. In addition, set designer Tom Butsch has created a space that is very visually interesting: the house as we see it is filled with clutter without feeling crowded, and includes lots of nooks and crannies for the large cast to inhabit. Plus, there are kittens on stage! Real kittens! Not for the entire show, mind you, but still – kittens!

Speaking of the large cast, it is just that – large. While Kaufman and Hart created characters so distinct and quirky that it 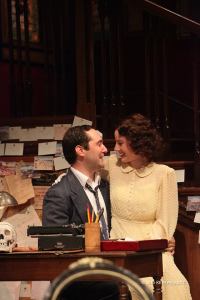 would be hard to dislike any one of them regardless of the acting, this production boasts a particularly talented cast in which it’s hard to find any weak spots. Raye Birk as the family patriarch finds a fine balance between grumpy old man and doting grandfather. His daughter and son-in-law are portrayed by local favourites and Jungle veterans Angela Timberman and John Middleton, and I challenge you to not absolutely adore Timberman in her role as the absent-minded playwright/mother. Honestly, I could go through the entire cast and tell you why I loved each one, but honestly, with three down and thirteen to go, I think I’ll save my keyboard the abuse and tell you this: there isn’t a single one I would change, and I particularly loved Julia Valen as the earnest candymaker/would-be ballerina Essie, and Max Wojtanowicz does a splendid job as her easygoing husband, Ed. Oh, and how not to love Allen Hamilton as the outspoken, overenthusiastic Boris Konekhov? Seriously, such an all-star cast.

If I absolutely have to find something of which to be critical, it is maybe that between the choice of play and the cast, this is a really safe bet for the Jungle Theater. The plot has a serious message — spend your energy on whom/what you love, because you only live once — but nothing too heavy or troubling. That said, I’m not sure this is actually a problem. It’s good to think about the serious and problematic things in life, but as this play itself reminds us, it’s also good to have some fun. So, if you need to beat the heat, treat yourself to an enjoyable, air conditioned evening at the Jungle Theater and hit up You Can’t Take It With You! It’s also your last chance to bid farewell to longtime artistic director Bain Boehlke, who will hand off his role to Sarah Rasmussen after this production. Good luck to both!