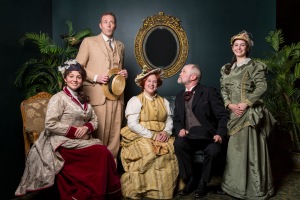 The Matchmaker, now on Park Square Theatre’s Andy Boss Thrust Stage, is writer and playwright Thornton Wilder’s (Our Town) satirical and humorous take on class differences, new wealth, love and the importance of having adventures. This is the play that was later turned into the iconic Tony-award winning musical, Hello Dolly!, starring Carole Channing and the 1969 movie starring Barbra Streisand. Girl Friday Productions has produced a laugh-out-loud funny romantic farce that offers life lessons in return for the frivolity. The play is suitable for all ages and offers wonderful performances, lovely period costuming and clever staging designed to elicit the most laughs. While leads Alan Sorenson (Horace Vandergelder) and Karen Wiese-Thompson (as Dolly Gallagher Levi) carry the show, this is a true ensemble play with many strong comedic performances throughout. Director Craig Johnson, an Ivey-award winning Twin Cities theater veteran, has this to say about the play: “The Matchmaker is, of course, a delightful comedy with moments of zany farce, sweet romance, and vivid characters. But in studying the script, I have been taken by Wilder’s pointed remarks about our relationship to work and money: How much money is enough? Do we look at the world as a place of scarcity or abundance? How does employment define or limit us? A melting pot of questions bubbles beneath The Matchmaker’s humorous surface.”

The play opens in a late 19th century store/house combo owned by the crochety and domineering Vandergelder. He is arguing with young artist Ambrose Kemper (Sam Pearson) who has asked for Vandergelder’s niece and ward’s hand in marriage (Elizabeth Hawkinson as Ermengarde). Vandergelder refuses to let his niece marry the poor artist even though he is planning to remarry. Dolly Levi, the matchmaker he has engaged to help him find a suitable bride, pretends that she is helping, but actually schemes to marry him herself. Vandergelder’s hapless clerk, Cornelius Hackl (Dan Hopman), who is longing for excitement, also meets the woman of his dreams, although she happens to be the one Vandergelder intends to marry. In the true spirit of a romantic farce, identities are confused while chaos and confusion reign supreme. Hopman and his sidekick Barnaby Tucker, played by Vincent Hannam, offer the funniest physical comedy of the play and demonstrate the importance of breaking out of your comfort zone to find adventure and love. Lindsay Marcy as hatmaker Irene Molloy, her simple yet devoted salesgirl Minnie Fay (Christian Bardin)  and family friend Flora Van Huysen, played by producer Kirby Bennett, also offer fine performances as the side characters unwittingly drawn into Dolly’s plans. Characters also break the fourth wall to share with the audience their own points of view on love, life and balancing vices. The most moving and poignant of these to me were Karen Wiese-Thompson’s and the final lesson to the audience by Hannam. David Beukema and Dana Lee Thompson, each playing several minor roles with gusto, are no less deserving mention in the ensemble cast.