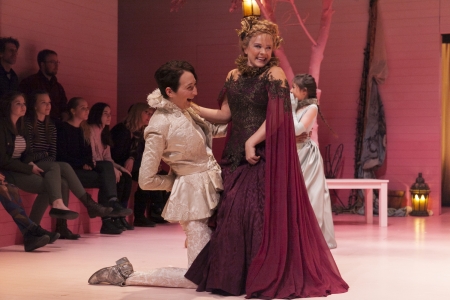 Seeing Shakespeare always makes me a little nervous. I do not fear the language or the twisty-turny plots; rather, my reaction is based on years of experience of seeing all sorts of wacky “new” twists on the Bard’s plays. I’ve seen a steampunk Macbeth and a post-apocalyptic The Tempest, a reverse-gender cast of Romeo and Juliet, and a modernized language version of Twelfth Night. Some of them worked, and some of them were just bizarre and hard to watch. So, when I heard about the Jungle Theater‘s all-woman production of The Two Gentlemen of Verona under the direction of new artistic director Sarah Rasmussen, I was wary. Wary but curious — not just to see the first show under Rasmussen’s reign, but to see what happens when the two titular gentlemen are in fact gentlewomen.

My wariness increased as I walked into the Jungle’s 150-seat house: the stage was dressed with a pale pink brick wall and two towering trees, whose branches and leaves both were a startlingly bubblegum pink. Me, I take such a bold statement as a sign either of extreme confidence or extreme folly. Possibly both. In this case, happily, there was no sign of folly.

Let me just go ahead and say it: The Two Gentlemen of Verona was awesome. It was possibly the first time that I’ve associated the word “kickass” with Shakespeare. It was fast-paced and energetic and gorgeous. Moria Sine Clinton‘s costumes were so beautiful as to deserve an entire paragraph (nay, an entire post) to themselves, except that I’ve never been much of a clothes horse, and I don’t think I can describe them sufficiently. They are a beautiful cross of Elizabethan and contemporary fashion in luxuriously textured fabrics; they tell stories about the characters before the actors even open their mouths without ever really overpowering the scene. Just… wow.

I’ve been struggling with what to say about the all-woman cast. The actors themselves are wonderful pretty much across the board. Christiana Clark as Proteus is glorious. She radiates confidence as she practically glides across the stage, and even as Proteus becomes something of a villain, forsaking his lady love and betraying his best friend, Clark is so charming that you can (almost) understand how he gets away with it. His would-be love Julia is almost manic in Maggie Chestovich‘s hands. Scratch the “almost”; there are several scenes where she is manic. But then, Julia is a teenager in Shakespeare’s script, and somehow it works. Mo Perry‘s Valentine was delightful and relatable, and.. well, see, the delightful thing about Two Gentlemen is that it has a long list of quirky, scene-stealing characters. Shá Cage was hilarious as the buffoonish Thurio, Barbara Kinglsey‘s unapologetically saucy Lucetta was delightful, and how could I neglect to mention George Keller as the cheeky Launce? But of course, the scene-stealer in a cast full of scene-stealers was Launce’s dog, Bear, a Lab/Newf/Dane mix whose ruffled collar and wide eyes immediately won over the entire audience.

The wide range of quirky characters is part of what appeals to me in casting all women: more of a variety of roles for women actors than is normally available. Sarah Rasmussen has said that the casting choice (first seen in a production dramaturged by Gina Pisale at the Oregon Shakespeare Festival) was a way to “[disrupt] assumptions about gender, allowing one to hear an old story [. . .] in new ways.” (notes from program) It’s a nice theory, but doesn’t entirely play out. The women playing male characters play them as men; although Proteus and Valentine are played by women, they wear men’s attire (or attire inspired by menswear), have short hair, take stereotypically male stances, while their love interests, Julia and Sylvia, wear long dresses and jewelry, have long hair, and act in a way traditionally called “ladylike”.

This isn’t a queer version of Shakespeare; it’s more of a feminist version of Shakespeare. It’s still presented as a heterosexual love story, and traditional gender roles haven’t been reversed; rather, the roles of every gender are played by women actors. It’s flipping the script on the tradition of men playing women’s roles as they did in Shakespeare’s day. This isn’t a criticism, although I’m not sure that women playing men quite achieves the goal of disrupting gender stereotypes.

What this production does do is present a clever, funny story in a fast-paced, vibrant, clever way. It’s truly a treat to experience, and even in the midst of all the Shakespeare frenzy (2016 marks the 400th anniversary of the Bard’s death), Two Gentlemen stands out as a delightful experience.

Special props to the cast and crew, by the way, for their cool handling of an opening night mishap: shortly before intermission, the entire light board went out, plunging the theater unexpectedly into darkness. The two characters who were in the midst of a declaration of love giggled, and one of the actors called out, “Talk amongst yourselves. We’re just making out up here,” prompting a ripple of laughter and applause. “This is why you come to live theater!” cried another voice, causing yet more applause. The lights were back up shortly, and after a brief series of on-stage giggles, the actors fell right back into their scene, and what could have been an awkward disaster became a lighthearted anecdote for audience members to discuss at intermission. Excellent.