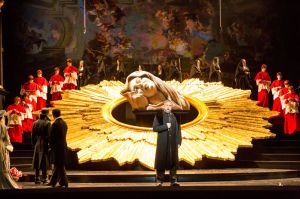 The Minnesota Opera’s production of Tosca included drama that is usually reserved for the opera itself. Only a few days before opening night, Hungarian soprano Csilla Boross backed out of the role of Tosca for “personal reasons.” Kelly Kaduce stepped in, having sung the part only once professionally (for the Houston Grand Opera). Any skepticism of Kaduce’s talent & ability to perform a monumentally demanding role was soon eliminated.

If Kaduce was feeling any trepidation or nervousness, it was well hidden. Her voice is clear and rich, and the confidence of Tosca’s diva was complete. She was a pleasure and the production was elevated by her presence. This was particularly evident in the Tosca/Cavaradossi duet of “Qual’occhio” in Act I. Her voice paired with Leonardo Capalbo’s resonant tenor was wonderful. Unfortunately, Tosca and Cavaradossi (as well as everyone else) are ill fated.

Tosca resembles a Jacobean revenge tragedy – no one gets out alive. It is often referred to as the most lethal of operas, and sometimes dismissed as simple and tawdry. But the experience of Tosca is surprisingly moving, with some of the most recognizable arias in the history of opera. There were powerful moments in the Minnesota Opera’s production and Andrea Cigni’s stage production was strong. As one would expect, the Lorenzo Cutuli’s costume design was gorgeous. 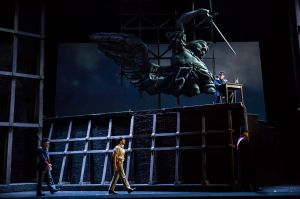 Jonathan Brandani conducted the orchestra. The musicians performance was dynamic, precise, and faithful. There were stretches where Mark Walters’ Scarpia was lost in the wind instruments and horns. His baritone seemed less full than the production required, but bass Benjamin Sieverding’s Sacristan was similarly overwhelmed by the orchestra.

This production is another example of the Minnesota Opera shifting the original time of an opera. This Tosca is moved 100 years forward, from 1800 to 1900. This is largely successful, but prompts some anachronisms.

The set was peculiar. It was not until the end of Act I that I understand the existence of the enormous gold sunburst nearly covering the stage. The sunburst was lofted and altar boys descending the stage on both sides while clergy stood sentry as the imposing thumbs of the Vatican. Though that sequence was breathtaking, the incongruity of the set leading up to it seemed incompletely considered. But in whole, the grandeur of the set matched the overwrought tragedy of the composition.

Next up at the Minnesota Opera is the world premier of The Shining (music by Paul Moravec and libretto by Mark Campbell) based on the Stephen King novel. That production promises to be provocative and great entry for opera novices.