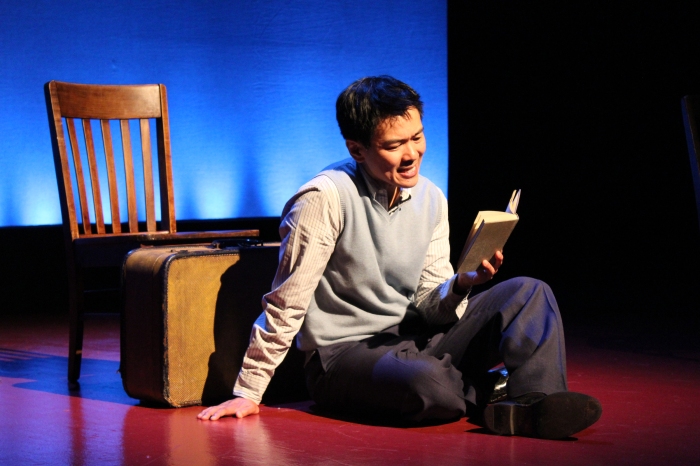 Every American should see this play.

In one of the most powerful moments of playwright Jeanne Sakata’s one-man show Hold These Truths, Gordon Hirabayashi realizes that his and his family’s faces are the faces of the enemy. By accident of race and ancestry, they are now the dangerous and unwelcome Other.

Hold These Truths tells the highly relevant, powerful, and rarely told story of American sociologist Gordon Hirabayashi (1918-2012). Hirabayashi was a student at the University of Washington in 1942 when FDR issued the now infamous Executive Order 9066 following the bombing of Pearl Harbor. Order 9066 authorized the indefinite imprisonment of Americans of Japanese descent in order to, in the words of the order, “[protect] against espionage and against sabotage to national-defense material, national-defense premises, and national-defense utilities.” Ultimately, nearly 120,000 Americans living on the West Coast of the United States were forced to abandon their homes, families, and livelihoods in the name of keeping America safe from the enemy.

Proud to be an American and reverent of the U.S. Constitution, he refused the exclusion order and took his fight all the way the Supreme Court–a fight that would last 45 years.

The sparse set-design allows the focus to be on de la Fuente and urges us to turn inward as we watch, reflecting on ourselves and our own actions and convictions. I watched wondering if I would act as bravely as Hirabayashi did; I left thinking about what it means to be an American.

It is a hard truth that Order 9066 faced little dissent from American citizens. By and large, Japanese Americans considered it their patriotic duty as wartime citizens to comply; even Americans who have subsequently been lionized as champions of civil liberties–including the likes of Edward R. Murrow (famous resistor of McCarthyism) and the national ACLU–vehemently supported Japanese internment in the interest of national security.

The adage history repeats itself is a platitude–not because it is untrue, but because it oversimplifies. In 2016, the dangers we face as a nation, the nature of warfare, and the faces of our enemy are vastly different than they were in the 1940s. However, the fundamental question we must ask ourselves as Americans remains the same: What truths do we hold self-evident?

As part of the Guthrie’s Level Nine Series, you can see Hold These Truths for only 9 dollars a ticket, and each performance includes a discussion with the audience. Hold These Truths plays through Sunday, October 23, 2016 in the Dowling Studio.

2 thoughts on “Hold These Truths”