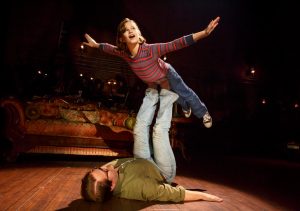 Fun Home at the Orpheum Theatre is devastatingly honest, achingly funny and worthy of all the praise it has received. The musical won five Tony Awards last year, including Best Musical, and made history as the first show written exclusively by women to win that award. Based on Alison Bechdel’s best-selling and award-winning graphic memoir, Fun Home introduces us to Alison at three different ages as she explores and uncovers the complexities of her childhood (mostly her troubled relationship with her father), while compiling a graphic memoir. No less significantly, the musical also explores the pain, confusion and triumph of coming out in America.

Adult Alison (Kate Shindle) reveals to the audience her unconventional Pennsylvania childhood in life stages: as a child (Alessandra Baldacchino) college student (Abby Corrigan) and adult. The three actresses playing Alison are wonderful — with sweet, soaring vocals and portrayals that give us a real sense of Alison’s strength, courage and innate wisdom. Corrigan is particularly appealing as college student Alison as she discovers her true self and unravels her father’s secret demons. Bechdel’s real life seems almost unbelievable in its quirkiness — her father taught English, restored old homes and ran a funeral home part time; her mother was an actress and teacher too. Despite the theatricality of Alison’s particular childhood memories, the musical raises the all-too-familiar and relatable themes of accepting parental failures, standing by your own life choices and finding the strength to soar above life’s conventions and tragedies. Robert Petkoff delivers a powerful performance as Alison’s father Bruce, giving him a frenetic and slightly creepy edginess. During Alison’s college scenes, I marveled at her luck in finding a friend and first love in Joan, played with street-wise tenderness by Karen Eilbacher. The musical numbers are delightful and poignant. My favorites were:  “Changing My Major,” “Ring of Keys” and “Flying Away.”

Fun Home, music by Jeanine Tesori, book and lyrics by Lisa Kron and direction by Sam Gold. Based on the graphic memoir by Alison Bechdel with music supervision by Chris Fenwick, choreography by Danny Mefford and orchestrations by John Clancy. At the Orpheum Theatre December 13 – 18; 910 Hennepin Ave., Minneapolis. Tickets are on sale now at the State Theatre Box Office (805 Hennepin Ave.), calling (800) 982-2787 or clicking to HennepinTheatreTrust.org. Ticket prices start at $39.