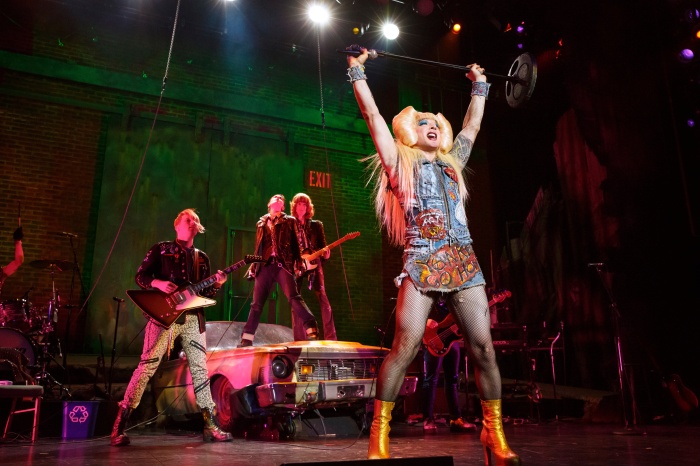 Euan Morton (front center), Hannah Corneau and Tits of Clay in Hedwig and the Angry Inch (Photo by Joan Marcus)

I just can’t seem to write a traditional reflection on Michael Mayer’s production of Hedwig and the Angry Inch, now playing at The Ordway in St. Paul. Normally I’d tell you a bit about the background of the show, some stand-out moments and give a final recommendation to see or skip the show at the end of the review but I just can’t wait to tell you that you must go and see this show, if at all possible. My heart has been moved tonight, moved in ways I didn’t know it needed to be moved.

The show is unique in many ways. It is both a play and a concert, yet not a traditional musical. One moment it is light-hearted and funny, the next your heart aches for the pain the characters endure in search of their missing piece. Don’t be fooled though, this is far from a Romeo and Juliet love story. The story is told through original rock songs that will make you question if you are actually in The Ordway or a sold out rock and roll concert at the Xcel Energy Center. The set has a couple of tricks that serve the telling of this story beautifully: the costumes, the lighting, and the scenic design all dance in tandem to truly create a heightened experience. My sincerest congratulations to the entire production team; this is a masterpiece executed with precision.

Hedwig and the Angry Inch centers around an age-old quest for love and even more simply: acceptance. Euan Morton plays a visually stunning and equally complex and talented Hedwig. Her story is not that of a fairy tale, but rather the opposite. Hedwig looks back and tells us bits and pieces of her life growing up in East Germany during the 1980’s, her distant mother and about her botched sex change which she underwent in quest of freedom and search for acceptance in the United States. While there’s much more to the story, Hedwig tells all in an off handed almost satirical way at times. You will be laughing at her personality and then she’ll hit you with a zinger right out of nowhere.

The plan to live happily ever after in the U.S. is quickly derailed not more than a year after arriving. Broke, divorced and alone Hedwig continues the quest to find her other half, not sure whether to be looking for something identical or complementary to herself. While singing about “The Origins of Love” the audience is invited to feel the vulnerability in Hedwig’s struggle of identifying as a gender that is truly as unique as Hedwig’s personality. Hedwig is telling us these stories of her past while also being supported throughout the show by her husband Yitzhak as played by Hannah Corneau. The two have what appears to be a very complicated relationship and we wonder if indeed they are each other’s other half. Yitzhak is a man of few words but by the end of the show you’ll be wondering who exactly helped you grow the most. Both Morton and Corneau wow the audience with their vocal talent, Morton is strong and powerful throughout and Corneau amazingly versatile from rich low notes to crystal clear highs. In the final moments of the show, the pair reminds us that the truest, deepest love is only possible when we accept ourselves, fully and completely, and we allow ourselves to accept others for everything they are as well. I am grateful to everyone in this production for sharing this moment tonight.

Hedwig and the Angry Inch is directed by Michael Mayer, the book by John Cameron Mitchell and music and lyrics written by Stephen Trask. The show runs now through February 19 at The Ordway, 345 Washington Street, Saint Paul. More information and ticket reservations can be found at www.ordway.org or call 651.224.4222.