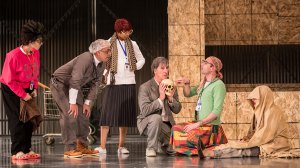 Refugia at the Guthrie Theater explores transition–as life stages, border crossings, displacement of people as refugees and immigrants–using an avant-garde and innovative mix of movement, music, poetry and comedy. Through interconnected chapters, the piece is formed from “devised theater,” differing from traditional theater in that the rehearsal process does not begin with a script and is born from improvisation, interviews, discussions and inspirational source materials, according the the play notes. Refugia comes from the internationally renowned ensemble The Moving Company (Dominique Serrand, Steven Epp, Christina Baldwin and Nathan Keepers – core members of the former Theatre de la Jeune Lune).

I love the inspiration and relevance of this world premiere and original production, which began when company members heard news stories about Syrian refugees. I also loved the brilliant and moving ensemble performances (Steven Epp, Jamal Abdunnasir, Kendra ‘Vie Boheme’ Dennard, Christina Baldwin, Maia Hernandez/Carolina Sierra, Orlando Pabotoy, Nathan Keepers, Rendah Heywood). I will admit to not being cool enough, however, to always appreciate theater that pushes the edge of conventional artistic experience. The chapter involving a dancer (a stunning Kendra ‘Vie Boheme’ Dennard) and a dying, polar bear was beautiful but bizarre. The production is three-hours long, including intermission, and my daughter and I thought at least two of the nine chapters were redundant. The most moving chapter to me involved Jewish emigres fleeing an oppressive USSR to a new life in Israel. Nathan Keepers as the husband gave a heart-wrenching performance as a composer describing the meaning and transformative nature of music. Keepers again as a trans librarian in the final chapters was delightful as comic relief. The set is a minimalist, industrial warehouse wonder–with innovative lighting and use of mixed media.

How can you resist this introduction from Artistic Director Joseph Haj: “Refugia comes to the Guthrie stage at a time when the global community is wrestling with its obligation and relationship to refugees. Not only nations, but cities, Minneapolis and St. Paul included, are deciding how to respond and what they can offer. The theater community is as well.”  Bravo. I may not be the sophisticated audience member this production deserves, but the creative team behind it absolutely wins my admiration. Don’t miss photographer Peter Beck’s portraits of local immigrants and other Minnesotans in the Level One lobby throughout the run of Refugia.

One thought on “Refugia”