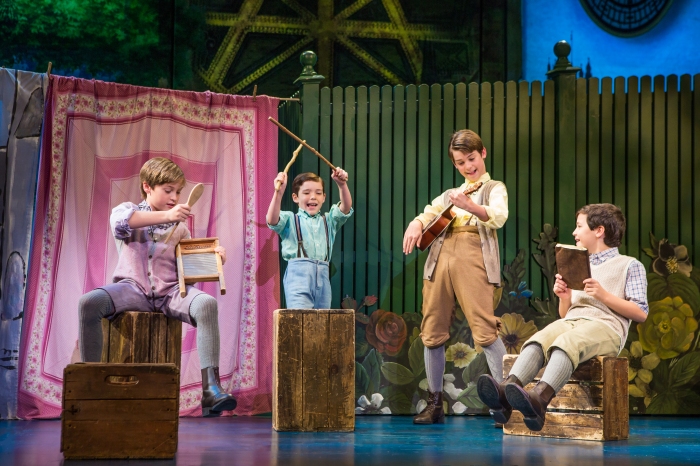 By ERIKA SASSEVILLE and JACOB FROELICH

Finding Neverland is the most fun, most magical, and most touching piece of theater these reviewers have seen all year. From top to bottom, this show is nonstop wonder. The story follows writer Sir James M. Barrie (before he was knighted in 1913) and the family that inspired his most famous and beloved character: Peter Pan. Honestly, there’s nothing more we want to say, then to tell you to go and see it, but since this is a review we’ll do our best to tell you about it anyway. It’s fun for the whole family, especially kids and the young at heart. We don’t want to ruin any of the magic, but must give credit where credit is due, so here are a few of the many things we loved about this production.

The music and lyrics by Gary Barlow and Elliot Kennedy, along with choreography by Mia Michaels do a marvelous job of creating a world that beautifully weaves together reality and imagination. Scenic and lighting design by Scott Pask and Kenneth Posner respectively, entice the senses creating intimate vignettes for personal moments and cosmic displays of space and time all gliding into our perception of reality. Truly, the collaborative effort this team of designers put into the production is nothing short of magic.

The production is filled with a passionate and versatile ensemble who have some of the funniest moments, but the four boys who inspired Mr. Barrie are an absolute delight. The boys are played by a miniature rotating cast of children, and are so amazingly talented that the entire audience was enchanted. J.M. Barrie is played with incredible joy and dexterity by Billy Harrigan Tighe whose chemistry with Lael Van Keuren as Sylvia Llewelyn Davies (the mother of the boys) could warm even Captain Hook’s cold heart. By the end of the show, the sniffling of the audience was nearly as loud as the actors on stage.

Like we said in the beginning, Finding Neverland is absolute magic. People will often talk about how “theater is transformative” or how we go to the theater for an escape but putting this production into words just wouldn’t do it justice. See this show and you will absolutely walk away changed. Take a lesson from your inner child and for a few hours, just believe.