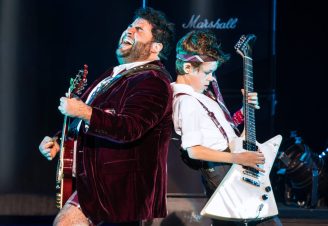 Rob Colletti and Phoenix Schuman in the School of Rock Tour. Photo by Matthew Murphy.

When Dewey Finn (Rob Colletti) gets kicked out of his rock band and his dream of becoming a rock star seems further away than ever, his roommate, Ned (Matt Bitner), and Ned’s pushy girlfriend, Patty (Emily Borromeo), give him an ultimatum: start paying the rent or get out. Luck strikes in the form of a phone call; private school headmistress Ms. Mullins (Lexie Dorsett Sharp) is looking for a substitute teacher. Dewey answers, lies, and with the promise of $950 a week, he walks into Horace Green and an opportunity he never expected. At first glance his kids seem like spoiled private school stereotypes, but that all changes when he hears them in music class. Suddenly, he sees their talent, he sees their drive and he sees a band ready to ROCK.

The real rock-stars of the show are undoubtedly the kids of Horace Green. These quadruple-threat kids between the ages of 9-12 can tickle the keys, shred on the axe, and slam on the drums just as hard as any adult rock band that this reviewer has ever seen. From the first time you hear them playing Mozart’s “Queen of the Night” in music class, you can feel the raw talent that creates the School of Rock. The band is made up of Zach (Phoenix Schuman) on guitar, Katie (Theodora Silverman) on bass, Lawrence (Theo Mitchell-Penner) on keyboard, Freddie (Gilberto Moretti-Hamilton) on drums and of course Dewey (A.K.A. Mr. Schneebly) on lead guitar and vocals. The band members find new friends, new joy, and a new way to communicate with those they love. For these musicians, rock music is more than a way to “Stick it to the Man” it becomes a venue to express themselves and finally be heard.

This show will have you rolling in the aisles (largely in thanks to Rob Colletti’s hilarious comedic timing and physical tomfoolery) and the music might melt your faces off. Andrew Lloyd Weber has pulled together an amazing rock show, and the musicians (both onstage and in the pit) have some serious rock-chops. Fans of the movie will love how true the production is to the movie and will appreciate the new songs written for the musical. Come see this show before it hits the road, it’s definitely not one to miss.

Performance dates are Tuesday, March 6 through Sunday, March 11 at the Orpheum Theatre. Performance times are Tuesday, Wednesday and Thursday at 7:30 p.m., Friday at 8 p.m., Saturday at 2 and 8 p.m., and Sunday at 1 and 6:30 p.m. Tickets can be purchased at the State Theatre Box Office (805 Hennepin Ave. Minneapolis), by calling (800) 982-2787 or by clicking to HennepinTheatreTrust.org. For information and reservations for groups of 10 or more, call (612) 373-5665 or email MinneapolisGroups@broadwayacrossamerica.com. Ticket prices start at $39.00. All pricing includes a Building Restoration Fee of $4.00.

One thought on “School of Rock – The Musical”