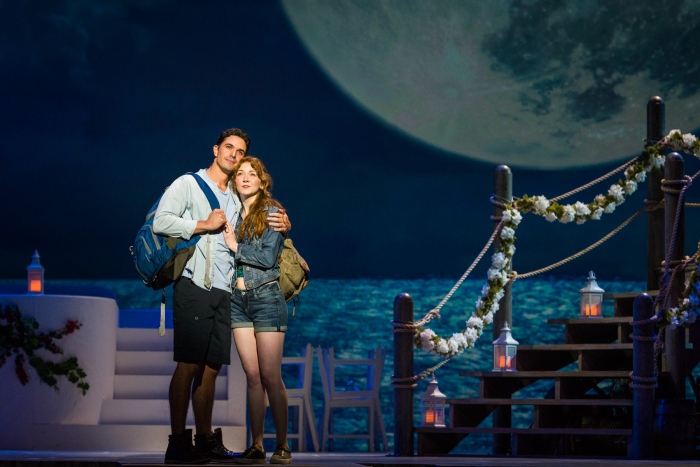 From the moment you find your seat, the scenic (Rick Polenek) and lighting (Ed McCarthy) design invite you to a paradise-like Greek Island. Soft light washes over sun bleached stone walls. A weathered pier leads to a twinkling sea achieved by rear projection. The creative team successfully sweeps you away from Minnesota for a few hours.

The cast is full of strong musicians. As Donna Sheridan, Christine Sherrill’s voice rises above them all. Her singing seems effortless; it is a seamless continuation of her character’s progression. The actor doesn’t stop and sing, Donna interacts with her feelings and the world around her- incidentally in a gorgeous belt. Sherrill’s tone is rich and clear; the older and wiser counterpart to the bright, sweet, soprano of her daughter Sophie, played by Caroline Innerbichler. Sherrill’s final wailed note at the end of “The Winner Takes It All” completely captivates the audience. There’s a palpable energy as they struggle to hold their applause until the button.

During the dream sequence that opens act two, the immense projection screen grows distracting. Larger than life images of the characters flash at the audience, over-emphasizing Sophie’s questions about her father and detracting from the movement onstage. As the projection fades, the cast finishes the number with billowing bolts of white fabric. This staging is much more visually interesting than the towering faces of the characters. It more subtly explores Sophie’s subconscious.

The three largest figures on Sophie’s psyche are Sam (Dieter Biebrauer), Bill (Aloysius Gigl), and Harry (Robert O. Berdahl); her three possible fathers. Sophie is supported by a loving mother, aunts, friends, and a fiancé. Still, she believes that she won’t be complete or truly know herself until she discovers which near stranger contributed to her gene pool. The three men playing these roles help compensate for this annoying plot point with their earnest and lovable portrayals. It’s hard to stay mad about the patriarchy when these guys are acting so sweet.

Even when the curtain closes, the party never really stops. Now through August 5th, watch for singing and dancing theatergoers spilling into the streets!

Mamma Mia! will perform July 17-August 5 in the Ordway Music Theater. Tickets are available on the Mamma Mia! performance page or by phone at 651.224.4222.