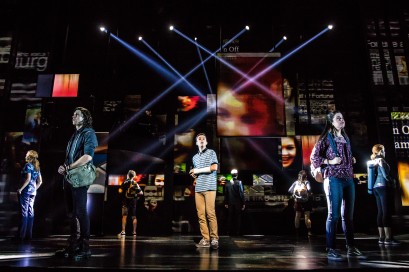 Stephen Christopher Anthony as ‘Evan Hansen’ and the Company of the First North American Tour of Dear Evan Hansen. Photo by Matthew Murphy. 2018

Storytellers from John Hughes to John Green have shown the world what it’s like for a teen to be on the outside looking in; Dear Evan Hansen goes a step further and provides deep emotional insight into the parent-child relationship. Playing now through June 9th at the Orpheum Theatre in Minneapolis, Dear Evan Hansen explores the story of the titular character (Ben Levi Ross and Alternate Stephen Christopher Anthony) as he becomes irrevocably linked to a classmate who took his own life, and the kind of family he’s always longed for.

Every element of the production helped carry the emotional weight. The lighting (Japhy Weideman), projection (Peter Nigrini), and scenic design (David Korins) all worked seamlessly to create a perpetual sense of isolation for every character on the stage. With heart-wrenching music and lyrics by Benj Pasek & Justin Paul and a simultaneously joyus and stirring book by Steven Levenson, the entire audience echoed with choruses of both laughter and sniffling throughout the performance.

The small cast did an exceptional job bringing the characters to life. The teenage characters all embodied the “outcast” archetype in their own ways. Over-ambitious Alana Beck (Phoebe Koyabe and understudy Ciara Harris), the blustering family friend Jared Kleinman (Jared Goldsmith), and grief-stricken Zoe Murphy (Maggie McKenna) all join Evan as they navigate the social waters of high school both on and off-line. Stephen Christopher Anthony was a speed-talking, nervous-fidgeting, revelation as Evan Hansen. He was equal parts hysterical and poignant when interacting with the world around him, and his vocals during the show’s big hits (“Waving Through a Window” and “You Will Be Found” in particular) brought the audience to tears more than once. While the teens deal with their own lives in the wake of a classmate’s death, we also witness how it affects the adults. The parent’s of the troubled Connor Murphy (Marrick Smith) are played by Aaron Lazar and Christiane Noll. They show two sides of what can happen when a parent loses a child. Noll as Cynthia Murphy is a mother who, despite everything, was not able to shield her son from the world. She is distraught  and broken after Connor’s death, while her husband Larry (Lazar) is deeply in denial. It takes their new connection with Evan to allow them to fully grieve and move on. However, as Evan grows closer to the Murphys, the crack that exists in his relationship with his own mother Heidi (Jessica Phillips) grows wider. Like Cynthia, Heidi is trying her best to help her son through the most difficult part of his life, but maintaining a career and single-handedly parenting a teenage son is no easy task. The performances by these two women are heartbreakingly honest and transform the story from a coming-of-age tale into a love letter to the bond between mother and son.