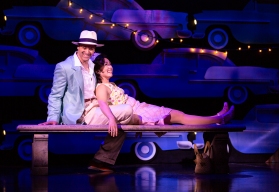 Stand up, the boat is rocking! Guys and Dolls bursts onto the Wurtele Thrust at the Guthrie Theater in Minneapolis with uncontainable jubilance. From the first trumpet fanfare to the final bow, it is crystal clear that the entire production aims to draw the audience in and give them the time of their lives.

The opening number is a perfect gateway into “Runyon-land,” a 1950’s Time’s Square sequence that features over-dressed tourists, under-dressed ladies-of-the-night, pick-pockets, crapshooters, boxers, policemen, and more. The ensemble immediately wows the crowd with their vitality and pure charm. It is instantly clear that the ensemble’s diversity is its strength. Nearly every size, color and shape of the human form is represented in the cast and every single one is a joy to watch. Gabrielle Dominique was particularly captivating; leaving the newstand to dance with Nicely-Nicely Johnson (Justin Keyes) and Benny Southstreet (Joel Liestman) during “Guys and Dolls,” hamming it up at the Hot Box Nightclub, and cutting loose on the Cuban dance floor.

The show’s four leads play their characters beautifully and have remarkable chemistry with each other. Olivia Hernandez’s Sarah Brown and Jeremiah James’s Sky Masterson match each other in stubbornness, conviction, and cleverness. Hernandez’s Sarah never feels like a naïve girl being led astray, she is every inch a woman who knows what she wants, and she takes it. Meanwhile, Miss Adelaide (Kirsten Wyatt) and Nathan Detroit (Rodney Gardiner) have fallen into a loving and comfortable routine after 14 years of engagement. Nathan reflexively produces his hankie at the sound of Adelaide’s sneezes and dutifully takes it back when she’s finished. Both couples demonstrate director Kent Gash’s assertion that women of this show are smarter than the men.

Kirsten Wyatt as Miss Adelaide wraps the audience completely around her finger. She is unapologetically herself with the effervescence of a teen and the self possession of a duchess. Adelaide vibrates with delight at her highs and slides into a droll halt at her lows. Believing that Nathan has stood her up, Adelaide instructs Sky to tell Nathan that she never wants to speak to him again – and to have him call her tomorrow. It is heartbreakingly sincere and hilarious. Adelaide owns the stage at the Hot Box, and makes this show.

This production proves the magic of diversity in action, both onstage and behind the scenes. Director Kent Gash, together with choreographer Dell Howlett, create a NYC story that resembles the city now more than the 1955 film. From the first scene, Gash and Howlett innovate this classic musical with a flare that is hotter than a night in Havana. “The Oldest Established” starts as to be expected, but halfway through is broken down with a dance break of “stepping” that incites a hilarious new line from Nathan Detroit. Pieces like “Havana” and “The Crapshooter’s Dance” highlight the cast’s agile dancers with heart-pounding group numbers. “Sit Down You’re Rocking the Boat” does not close the show, and yet it still brought the audience to its feet. Gash, Howlett, and music director J. Oconer Navarro with orchestrator Darryl Ivey dug into the song’s gospel bones. Keyes as Nicely-Nicely Johnson draws the initially skeptical General Matilda B. Cartwright (Regina Marie Williams) fully into the fray and together they bring the house down.

The lighting design by Dawn Chiang showers the stage and actors with vibrant color and detail. From the backlit skyscrapers to the flashing “GUYS” and “DOLLS” that punctuate the titular number, Chiang’s design brings the “city that never sleeps” to the Guthrie stage. The period costume design by Kara Harmon is timely, lively, and bright. The men’s suits are a tapestry of jewel-toned hues and patterned-ties, the women’s dresses are ruffled and satiny. Every piece perfectly represents each character and gives the audience a taste of the times.

Playing now through August 25th, this Golden Age musical finds a vibrant new life in 2019; it might just be the most fun you have at the theatre this year.