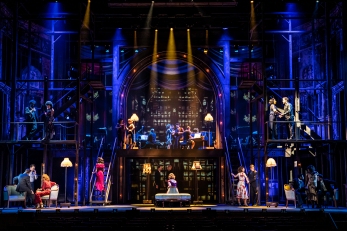 The Ordway’s 42nd Street brings a completely new meaning to a “toe-tapping good time”. With an all-star cast, consisting of two Tony Award winners Tamara Tunie (Dorothy Brock) and Jarrod Emick (Julian Marsh), 42nd Street is the perfect place to take in some truly jaw-dropping talent. Prepare to be pulled in from the very first second, and stay entranced well after the curtains close.

I would have never thought that tap dancing could bring so much life and joy to the stage. 42nd Street changed that thought quickly, and made me fall totally in love with every step the cast made. I truly believe you will come out of this show with a brand new appreciation of tap after seeing the magic Jared Grimes (choreographer) graces us with. From solos to full cast numbers, music accompaniment to just their shoes, there was not a tap out of place. The complete synchronicity of the cast is one of the most inspiring things I have ever witnessed on a stage.

Adding even more to the amazement that is this show is the work of, Mike Baldassari (lighting), Emilio Sosa (Costuming) and Paul Tate Depoo III (scenic design) who worked flawlessly together to create that very fresh, new, and modern take on this beloved Broadway classic. The musical number “We’re in the Money” alone is a clear testament to how much work and thought was put into every aspect of the show. It surprises, wows, sparkles, and sounds unbelievable. I would dare to say that this number was perfection.

I could sing even more praises for this show, but I would much rather you get yourself to The Ordway and hear the wonder that is Tamara Tunie’s voice. When she took her first breath before singing, a silence unlike any I have experienced fell across the theater. I could tell that every person in the theater was ready to hang on her every note, and they surely did just that. I found myself wishing I had a sweater to cover the goose bumps I had throughout each of her songs. It was an honor to hear and see her in her element.

42nd Street is the most all-around impressive show I have personally seen in some time. I would like to personally thank director Michael Heitzman for every decision he made that came together to make such a fantastic and enjoyable piece of theater. Please, do yourself a favor and meet those dancing feet, on the avenue they’re taking you to… Forty-Second Street.