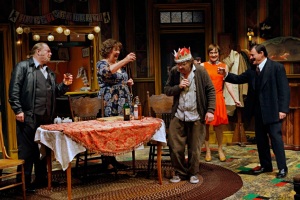 There’s a ceiling fan that slowly turns throughout the entire production of Harold Pinter’s The Birthday Party, currently on stage at the Jungle Theater. The fan, one of the many subtle touches of Joel Sass’ beautifully shabby set, marks time steadily and faithfully, and this constant rhythm underscores the deceptively quotidian nature of play’s premise. An aging couple, Meg and Petey (Claudia Wilkens and Richard Ooms), begin their morning with a little routine that one imagines these two characters have acted out every morning for years. Meg prepares Petey a bowl of cornflakes as if it’s a special dish, Petey eats the cornflakes while absent-mindedly reading the paper, and Meg asks Petey if the cornflakes are any good. The hilarious monotony that Wilkens and Ooms establish in the first scene is one of the production’s strengths. Like the ceiling fan, their morning repartee serves as a counter point to the seemingly less quotidian, more sinister elements of The Birthday Party.

The birthday party itself quickly emerges as the menacing event at the play’s core. While many of our associations with birthdays and parties are happy ones, Pinter’s play offers a scenario in which celebrating one’s birthday is not a carefree occasion, but rather a mechanism of repression and control. The birthday boy in question is Stanley (Stephen Cartmell), Meg and Petey’s long-time boarder. A piano player who hasn’t had a gig in months, Stanley at first seems no more than a washed-up lay-about. But the arrival of two mysterious men (Tony Papenfuss and Martin Ruben) who insist on throwing Stanley a birthday party raises all sorts of questions about Stanley’s character, as well as his past.  Under their direction, the party becomes a hellish nightmare from which Stanley cannot escape.

The production is at its best when it contrasts Stanley’s duress with the obvious enjoyment of other characters. Meg, for example, has the time of her life at this party. The self-proclaimed “belle of the ball,” she giggles and prances around as if it were her birthday party. Indeed, Claudia Wilken’s performance as Meg, is the production’s most successful; it’s idiosyncratic without coming across as a caricature. Unfortunately, the same cannot be said for the rest of the cast. Although they are clearly talented, their performances tend towards too much affectation, a tendency that seems to be the result of Joel Sass’ direction. To be fair, this direction does work in the play’s favor at a few important moments, but more often than not it’s distracting.

What’s more, although the production does a great job of contrasting Stanley’s experience of the party from that of the other characters, it does not do enough to highlight how these other characters are united in his repression. After all, it’s not only the mysterious men that menace Stanley. He’s also menaced by his hosts and acquaintances, who unwittingly participate in the designs of these men. Of course, their participation in his repression takes many different forms, but an exploration of how these differences enable each other would have added an important layer of nuance.

Still, although this Birthday Party doesn’t quite pack the punch that one might hope for, it’s an incredibly rich play that has much to offer our contemporary moment. After all, exploring the ways repression – in all of its myriad forms – barges into our private lives remains of the utmost importance.