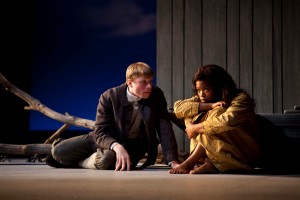 How do we talk to children about race? With its recent production Lizzie Bright and the Buckminster Boy, The Children’s Theatre Company provides an answer to this question by rejecting its premise. In this new play, an adaptation of Gary Schmidt’s 2004 Newberry Award-winning children’s novel based on a true story, it is the children who talk to their parents and elders about race. Indeed, it’s the Buckminster Boy, also known as Turner Buckminster (Sam Bardwell) who possesses a kind of innate humanity the adults in his town lack.

As the new kid in town and the minister’s son, Turner Buckminster has quite a bit of difficulty adapting to his life in Phippsburg, Maine. Turner’s immediate problem is not race, because he, like all of the other inhabitants of Phippsburg in 1911, is white. Although he’s earnest and obedient he has a knack of getting himself into trouble, and can’t ever quite seem to make friends with the other boys in town. One day, when trying unsuccessfully to hang out with the town deacon’s son, Willis (Miles Duffey), Turner comes across the clamming spot of Lizzie Bright Griffin (Traci Allen), a girl who lives on a small island across the shores from Phippsburg. Called Malaga, this island is the home of a mixed-race community that the town of Phippsburg had shunned for decades. Lizzie and Turner quickly become fast friends and Turner becomes an advocate for Lizzie and her family when the townspeople set about displacing Malaga’s population in order to develop the land and attract tourism.

A beautifully designed set by G.W. Mercier highlights the contrasts between life in Phippsburg and life on Malaga Island. The scenes in Phippsburg, which take place alternately at the minister’s house and at the house of the town’s long-time resident Mrs. Cobb (played hilariously by Autumn Ness), include the town’s small church in the background, and these scenes are often accompanied by arrangements of well-known Protestant hymns. This religious setting allows the play effectively to underscore the hypocrisy inherent in the town’s emphasis on its Christian goodness even as it practices racial exclusion. The portrayal of Malaga Island as a sort of natural paradise where people are unrestrained and free serves further to underscore the hemmed-in quality of Phippsburg.

It’s perhaps because the production so successfully highlights the differences between these two locations that the contrast struck me as so troubling. By portraying Malaga as a paradise, a kind of Eden to Phippsburg’s civilization, the play minimizes the poverty and hardship that living in a marginalized community often entails. This well-intentioned but ultimately troubling portrayal of Malaga itself is consistent with how the production characterizes the island’s inhabitants. Lizzie and her grandfather both inhabit stereotypical positions vis-à-vis the white characters. He is the wise old patriarch who maintains his equanimity despite the rationalized oppression that he and his community endure from Phippsburg’s white inhabitants. For her part, Lizzie plays the free-spirited and sensitive mixed-race girl who is in touch with all things natural and spiritual, and thus is able to help Turner come to terms with himself and stand-up to his elders.

The narrative structure of the play unfortunately doesn’t help to contest the divisions between Phippsburg and Malaga. Cheryl L. West’s script and Peter C. Brosius’ direction reinforce the divisions between these two communities, even as they explore the unlikely and quite heartwarming friendship that develops between Lizzie and Turner. Although there’s a certain degree of reconciliation and consciousness raising that goes on during the play, the human costs of these developments remain under-explored and too easily dispensed with. I should note that I have not read Gary D. Schmidt’s celebrated book, and thus cannot comment on how much the staged adaptation adheres to or departs from its characterization, plot development, and denouement. In the play, the forced displacement of the community on Malaga Island prompts Turner’s father to realize – belatedly and tragically – how misguided he had been in trying to please the established townspeople. By focusing on this realization (and its positive effects on Turner’s relationship with his father) instead of attending more directly to the consequences the displacement had on the residents of Magala themselves, the end of the play paradoxically displaces them once more.

In pointing out these problems with how production handles race and racial difference, I do not wish to minimize the importance of The Children’s Theater’s work. I applaud them for taking on such a difficult subject. To be sure, at its heart Lizzie Bright and the Buckminster Boy offers children an important lesson, namely that adults are often wrong, and that it’s necessary to stand up to them in the name of justice and equality. What’s more, the program notes rightly point out that the displacement of a minority community is not just an historical problem, but is also something that continues to occur, often in the name of social goods such as economic development. Acknowledging the sincerity and care with which the Children’s Theatre approaches this important and timely topic, I nonetheless wish that Lizzie Bright and the Buckminster Boy had done more to disrupt rather than to repeat racial stereotypes and social patterns.