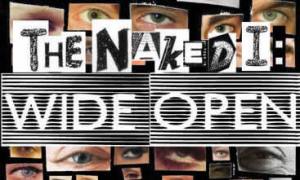 by SOPHIE KERMAN
Eve Ensler’s “The Vagina Monologues” were certainly ground-breaking in 1996, but the contemporary conversation about gender – and all the many fluid forms it may take – makes Ensler’s focus seem a bit narrow. After all, some people have no particular affinity towards their vagina, while others ardently wish that they had one. Although gender identity is intimately connected with genitalia, its expression is about more than what parts you were born with. The 20% Theatre Company‘s original work The Naked I: Wide Open is a set of monologues for the post-Ensler community: a group of confessions not about the genitals people carry around, but about what happens when those little bits of flesh don’t quite suit the person they are inside.

The set of monologues was created by the company and first premiered in February 2012 to a sold-out house. The fact that the 20% Theatre Company has packed the theater again only four months later is a testament both to the quality of the work and to the need that this play fills within the queer community. Spanning a wide range of experiences, there is a lot to identify with here, no matter whether you share a gender identity with the performer on stage or not.

The thematic thread that runs through the entire piece is the need for acceptance – both from larger communities and from oneself. As many of the characters struggle to match their appearance to their gender identity, they all engage in intense self-examination and often surprising revelations. One of these key moments is expressed beautifully by Erica Fields in “Congruity,” where a post-transition woman suddenly finds a sense of grace she never knew she had in her new body.

In another piece, “Just Me,” Kelly Waterman explores the idea that while surgery can help create physical and emotional congruity (in this case, to embody a masculine woman), an operation itself cannot create congruity with a world that seems to need labels in order to understand each other. What’s more, the need for a label can often have devastating psychological effects. In “Mine to Face” (written and performed by Katie Burgess and her extremely expressive face), a transwoman on a Greyhound bus deals with both a hostile neighbor and a desperate desire to shave; for her, the neighbor’s question – “What the f*** are you?” – mirrors her own discomfort with her physical appearance.

These moments of incongruity are, of course, difficult for the person whose gender is in question. But The Naked does not overlook the identity conflict for those who love them, both pre- and post-transition. In “Evolution,” Jen Tuder mourns the transformation of the woman she once loved into a man she does not yet know. And though “Dear Dad” is written by a transman to his father, Tom Glaser, as the father, does not need to speak to show his confusion and regret when his parenting is called into question.

Despite the pain that surfaces in almost all of these monologues, there are some bits of sparkling comedy and optimism that run through the evening. While L Puck Matz‘s character in “Coming Out… Twice?” is outed – to herself – by her drunk parents, Abel Knochel (“The Story of Bob”) finds humor in a truly horrifying surgical experience. The teacher-student relationship also appears several times, and whether in the case of the inquisitive seven-year-old in “Boy or Girl?” or the compassionate teacher in “Superhero,” the message is consistently that with an open mind, gender does not always need to be as burdensome as it has been in the past.

In this broad range of monologues, certain pieces come across as more “amateur” than others in terms of writing or performance. But under Claire Avitabile‘s artistic direction – and thanks to the many other talented directors of individual monologues – The Naked I: Wide Open never loses momentum and never feels redundant. The performers’ heartfelt conviction is evident in every single one of the monologues, and the mosaic created by their experiences is as complex, multi-faceted, and difficult to contain as gender expression itself.

The Naked I: Wide Open, presented by the 20% Theatre Company at Intermedia Arts, 2822 Lyndale Avenue, Minneapolis. June 13-16, 2012 at 7:30pm. Tickets: $5-$25 sliding scale, email tickets@tctwentypercent.org or call 612-227-1188. Unclaimed tickets will be given away starting around 7:20pm each night; a handful of people will get in the theatre each night from the waiting list – guaranteed!! http://www.tctwentypercent.org/season.html

One thought on “The Naked I: Wide Open”