The Guthrie Theater’s new musical production of Roman Holiday, based on the iconic 1953 movie and book by Paul Blake, has all the glamour, glitz and stylish corniness you would expect from a romantic comedy set to classic, toe-tapping Cole Porter tunes performed by a fabulous live pit orchestra (under the musical direction of Andrew Cook). The Guthrie’s perfect date night and girls night out musical event offers amazing lead singers with Stephanie Rothenberg as Princess Anne (in the Audrey Hepburn role) and Edward Watts as Joe Bradley (in the Gregory Peck role), exuberant choreography and ensemble dancers, 1950s-inspired costumes, a wildly talented supporting cast and a richly designed set.

The story follows Princess Anne, a duty-bound young woman craving adventure, who embarks on a widely publicized royal European tour that ends in Rome. Anne, overcome by the dreariness of her duties, sneaks away from her royal entourage to explore the city. She meets Joe Bradley, a handsome but world-weary American newspaper reporter who, after discovering her real identity, decides to help her pursue a full day of freedom and adventure in Rome while secretly capturing her story for the media scoop of the year. In the movie, Joe Bradley hopes to earn enough money to return to the United States to further his writing ambitions. In the musical, his dream is to write songs for Broadway, allowing the introduction of several Cole Porter classics, such as “Night and Day” and “You Do Something to Me.”  Helping him is his photographer friend and sidekick, Irving Radovich, played enthusiastically by Jim Stanek in his Guthrie debut. Radovich’s erstwhile girlfriend, Francesca, is Guthrie regular Christina Baldwin, whose performance as an Italian cabaret singer and confidante to Princess Anne is worth the price of admission. Her over-the-top, full-on glam costumes, her Marilyn Monroe-like flirtations and her stand out musical number, “Just One of Those Things,”  involving male dancers in skin-tight pants, had the audience whooping in appreciation. I couldn’t wait for her next scene. Another outstanding supporting role performer was Michelle Barber as the Countess, who urges the Princess to “Experiment” and live her life fully. Todd Rosenthal (Set Designer) and Mathew J.  LeFebvre (Costume Designer) also deserve praise for invoking a lush and lively 1950s Rome – the Trevi Fountain, in particular, was amazingly detailed.

A word of warning: if you attend the play hoping for a faithful rendition of the movie, you may be disappointed. As a huge fan of the movie and the romantic comedy genre in general, I had to stop myself from making comparisons throughout the performance. As the fourth most beloved romantic comedy movies of all time, according to American Film Institute, Roman Holiday featured the most quintessentially masculine and feminine actors of their day in a one of the most heart-wrenching love stories of that genre. The heartbreak of watching a sublime Hepburn, who won an Academy Award for Best Actress for her performance, and Gregory Peck’s nuanced portrayal of characters who fall in love slowly over the course of a day only to abandon it out of sense of duty is what distinguishes the movie from most romantic comedies to follow. In the end, the musical pulls the glamour and fun from the movie but leaves behind much of its soul.

My daughter Erika Sasseville, who was my date and is a theater major in college, loved Director John Miller-Stephany’s version.  Here is her review:

“I’ve seen clips and snapshots of the movie version of Roman Holiday and I knew the story, but I went into the Guthrie’s production of the new musical with a clean slate, unlike my mom. Overall, I thought the show was great. The acting was true, the music was lively when it needed to be and heartbreaking where it counted. The choreography was exciting and fun and the direction was spot on. In short, I would highly recommend the show to all, even those who haven’t seen the original movie. I was immediately struck by the voice of Stephanie Rothenberg  (How to Succeed in Business Without Really Trying) as Princess Anne. Her character’s innocence and lust to experience life was evident immediately and drove the rest of the show forward. Another of the show’s powerhouse women, Francesca Scabulo (Christina Baldwin) stole every scene she was in. She was everything you expect from an diva, with the heart of an Italian mother. The leading man, Joe Bradley (Edward Watts), was charming and his voice and movement were excellent. The set, designed by Todd Rosenthal, was spectacular: from the small corner café to the Trevi Fountain, every piece found a way to evoke the Eternal City.” 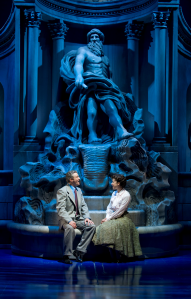