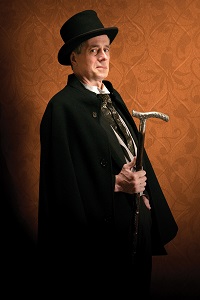 by SOPHIE KERMAN
Poor Sherlock Holmes! With the number of literary, theatrical, and cinematic re-imaginings he’s gone through since his inception in 1887, the man has a lot of baggage. His latest incarnation by Jeffrey Hatcher is “despondent”, as if the past century of crime-solving exploits has just about worn him out, but of course a new case will see him on his feet again… won’t it?

The clever conceit of Sherlock Holmes and the Adventure of the Suicide Club has us questioning whether Sherlock has just had enough of his life as a detective. The Suicide Club, which Holmes has just joined, is a venue wherein its suicidal members lacking the requisite courage can arrange for someone else (a randomly selected other member) to do the deed for them. It is, of course, no surprise to the Park Theatre‘s audience when it turns out there is a larger game afoot than a simple meeting of depressed and cowardly gentlemen. (I should note here that the original idea actually comes from a set of Robert Louis Stevenson stories, not one of Arthur Conan Doyle‘s originals – but the insertion of Sherlock Holmes fits seamlessly into Stevenson’s original concept.)

There are, actually, very few surprises to this play, but that isn’t necessarily a bad thing: Holmes needs no re-invention when the original archetype is already fun to watch. Steve Hendrickson makes an utterly believable Sherlock, delivering on all the quick thinking and dry wit that we expect from the iconic detective. The rest of the ensemble, playing a range of characters from a Russian prince to a cream-puff-eating newpaper heir, also embody their roles exactly as one might hope: with distinct, slightly (but not overly) exaggerated personality traits, and accents that are, as a whole, more consistent and accurate than many I’ve seen on a Twin Cities stage.

Though Holmes (the character, not the actor) may or may not show signs of detective burn-out, the audience does not tire of following along as he unravels this new mystery. There were one or two moments when I wondered why Sherlock might not have considered events from a different angle, but I could forgive Holmes’s oversights in the service of a fun theatrical experience that fully immerses us in 1914 London. David Mann‘s direction is fast-paced and engaging, and Michael Hoover‘s set design is fairly genius. Using projections (by Todd F. Edwards and Ben Harvey) onto tall walls that manage to create both a sense of long perspective and close quarters, we accompany Holmes from his study to a foggy London evening to the Savoy Hotel with minimal time lost on set changes and no sacrifice of the play’s pervasively dark mood.

A fun and well-played game for all those who like a good mystery.