by SOPHIE KERMAN
If you haven’t heard of Transatlantic Love Affair yet, you might be a little bit behind the curve. The company has been creating its own brand of physical theatre since 2010, and has been picking up Ivey Awards and annual Fringe Favorites left and right ever since. Their ability to captivate audiences year after year lies in the way they bring stories to life on a bare stage using only their own bodies, minimal lighting, and a sole musician to complete the atmosphere. With a core ensemble that has worked together since the beginning, Transatlantic Love Affair has mastered their signature blend of no-frills nostalgia and innovative choreography.

This time around, they are presenting Ash Land, a retelling of the Cinderella story which, as the company has done in the past with Ballad of the Pale Fisherman and Red Resurrected, they have expanded from an earlier Fringe version. Ash Land unfolds slowly, at the pace of its characters, who are farmers trying to make ends meet during the Dust Bowl. The soulful rhythm of Harper Zwicky‘s steel guitar and the ensemble’s artful evocation of wind moving through fields create a beautiful sense of the land without any need for props or a set; the company fills both the Illusion Theater‘s wide stage and its 90-minute run time with an expansive aesthetic that mirrors the vast open spaces of the Great Plains. 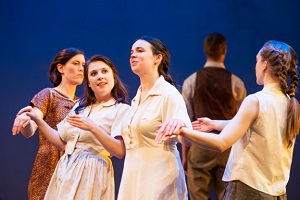 To parallel the play’s deep sense of place, the characters are also imbued with rich internal lives that are more often shown physically than spoken aloud. We can see the love behind the interactions between Ellie Stone (Adelin Phelps), the Cinderella character, and her parents (Derek Lee Miller and co-Artistic Director Isabel Nelson). After the death of Ellie’s mother, Miller‘s entire physicality changes to reflect his character’s grief and lack of an emotional anchor after the death of his wife. One of the most satisfying contributions to the Cinderella story is in Heather Bunch‘s interpretation Abigail Stone, Ellie’s icily pragmatic aunt; unlike the unmotivated meanness of the wicked stepmother in the Disney version, Abigail is driven by an unspoken pain that lends great depth to a traditionally two-dimensional character. And Ellie’s love interest James Crane, played by Transatlantic newcomer Nick Wolf, is not so much Prince Charming as he is Prince Charmingly Awkward.

Yet again, the Transatlantic Love Affair and director (and co-Artistic Director) Diogo Lopes have told a lovely story. However, as someone who has seen the company’s work from the beginning, it is a lovely story that leaves me with a niggling feeling of dissatisfaction. Some of this comes from the pacing of the show, which features moments (particularly in James’s pursuit of Ellie) that serve more to highlight the ensemble’s coordination than to further the plot. I suspect the show may have proved more pleasing in its tighter 60-minute Fringe incarnation.

My other reservation, however, comes from the company’s four-year history of excellent work. It is clear by now that the Transatlantic Love Affair has created a formula. It is a formula for touching, beautifully executed, original productions in a style that is uniquely their own… but it is a formula nonetheless. Like a good band after a few strong albums, the company has honed their craft to a point where their work now seems a little bit safe. As one familiar with their past shows, I find myself wishing they would push themselves further the next time around, whether stylistically or in their choice of content.

For those who have not yet seen one of the company’s richly imagined productions, however, Ash Land is absolutely a show to see. It will pull you in more deeply than you expect, and it will remind you of the ways that good storytelling can create visible worlds out of thin air. And fans of the Transatlantic Love Affair can rest easy knowing that even if it doesn’t surprise you, Ash Land tells its story with the grace and sensitivity that we have come to expect.