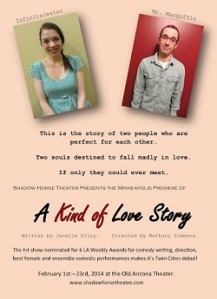 by TAMAR NEUMANN
A Kind of Love Story begins with the frank admission that this is a love story. It’s a story we’ve heard a thousand times before: Boy meets Girl. Boy tries to get Girl. Boy fails. Then Boy succeeds. Then Boy and Girl live happily ever after. Sometimes we see the story in a slightly different format as Girl meets Boy, but the structure remains the same.

What Jenelle Riley (the playwright) does differently with her play is to focus less on what happens after Boy meets Girl and more on what it takes to get to the point where Boy can actually meet Girl. The Boy and Girl in this play are Allison O’Neil (Kendra McMillan) and Mark Collins (Ware Carlton-Ford). They are destined for each other (at least that’s what the Narrator keeps telling us) but it takes all eight chapters of this play for them to finally meet. The joy of this play is in the journey you take with these characters. There are awful blind dates, almost encounters, opportunities for love with old flames, and hook ups with past boyfriends. Finally, the two characters are brought together for their big kiss and the audience is given what we’ve been waiting for—a love story.

But what truly makes this play worth watching is not the love story (or the anticipation of a love story) but the commentary on what it is like to be single and looking for love. There are jokes about always being surrounded by couples, scenes of horrible first dates, and platitude after platitude of how to find “the one.” At one point Allison is told to “stop trying” and to “put herself out there.” She is, understandably, confused by these seemingly opposite pieces of advice. How do you “stop trying” while still “putting yourself out there?” Unfortunately, this is a mystery the play does not stop to answer.

The world premiere of this play was produced in Los Angeles and Shadow Horse Theatre Company has been kind enough to bring it here, lightening up our dreary Minnesota winter. While I did not have the privilege of seeing A Kind of Love Story in Los Angeles, I suspect the production there was much tighter, given the amount of awards it won. The potential for hilarity is there in the script, but this cast had a difficult time drawing it out. Perhaps it was opening night jitters, but it wasn’t until the second half that this production really felt comfortable in the world they were creating. That might be slightly owing to the Narrator (Christopher J. Mogel) who read his part as a voiceover. Mogel’s reading sounded like he was seeing the script for the first time. He frequently stumbled over words and had little inflection. This poor performance detracted from the overall quality of the play and made the part of the Narrator feel painful and gimmicky.

In contrast to the Narrator, both McMillan and Carlton-Ford were able to capture the necessary sweetness and vulnerability of their characters. Owing to the fact that there was not much depth to their characters beyond that sweetness, their overall impression is mostly forgettable. You will find yourself rooting for them, and hoping that they finally meet, but you will also most likely find yourself wishing for other characters to return and liven up the story. Even the actors, who were good at what they did, could do little to make these characters truly interesting.

The true fun of this play (as in most fairy tales) lies in the “villains” Lucy Andrews (Bethany Ford Brinkley) and Max Brockman (Matthew Saxe). Both Brinkley and Saxe seemed to be having a great time and this helped improve the energy of the show. Even when you wanted to hate them, you just kept hoping they would come back onstage so you could see what they were going to do next.

If you are looking for that perfect little marshmallow of entertaining love for Valentine’s Day, look no further. Shadow Horse Theatre’s A Kind of Love Story will deliver the perfect treat.