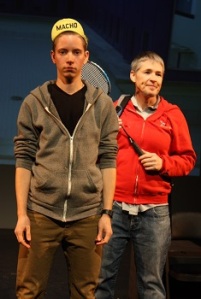 by TAMAR NEUMANN
This February experiences a different kind of love story – one that doesn’t stick to traditional heterosexual or homosexual norms. Instead it focuses on stories that are rarely heard, stories that explore queer and trans* experiences.

The 20% Theatre Company, known for promoting the work of female and transgender theatre artists, has started a series of performance pieces entitled, “The Naked I.” Their current production, “The Naked I: Insides Out” is a series of short scenes, monologues, spoken poems and movement pieces that depict the experiences of queer and trans* people. It features the works of over 75 queer, trans* and allied artists, and while each scene, monologue or performance is a little different, they all touch on what it could mean to be queer or trans*.

The stories presented by this piece of theatre are compelling and eye-opening. They are exploring topics that are not typically found in mainstream theatre and they are doing it in a way that is provocative and thought provoking. And most of the time, this production works. The show flows seamlessly from one scene to the next, and there are some incredibly strong performers and performances. Cat Hammond’s introspective performance during Corporeosartoriaphobia, combined with the visual of constantly stripping away clothes to find the just the right style to match Hammond’s body, creates a powerful piece of theatre. The piece Knock on Wood explores what it would mean to be the mother of a transgender* child; it does it using a cliché we are all too familiar with, yet it somehow manages to empower the cliché and turn it into a prayer for all transgender* children.

Other performances, including I Shook, A Requiem for the Queers (Or Why We Wear the Color Purple), Asterisk*, and An Apology From My Mind to My Body, remind the audience of the battle waged by queers and trans*, and the history of that war. Each story is powerfully performed and powerfully moving.

But even though the intentions of the show are great, there are moments when the pieces fall flat. There were moments when I felt like I had left a piece of theatre and stepped into a lecture hall. (And I’m not talking about the scene that is actually designed like a lecture.) Theatre is meant to empower through emotion; when this show focused on the stories, the real human stories being told, the pieces became unforgettable. But there were times when that focus got lost, and that made the show feel much less influential.

As a piece of political theatre, this doesn’t always work. As a piece of human storytelling, this play finds a voice for people who don’t always have one.