by SOPHIE KERMAN
There is a danger in having a formula that works as well as Mixed Precipitation‘s annual picnic operettas. We know the recipe hits all the right notes (so to speak): first, start with an operetta – guaranteed good-quality music – and add in some more contemporary songs and an anti-corporate message to reach a target audience of modern adults and families. Put this new adaptation in a community garden, so the theatrical space is automatically lovely, and top it all off with a five-course tasting menu and silly food-related puns. This is an artistic event tailor-made for the Twin Cities’ hip, bicycle-riding locavores without skimping on the vocal and instrumental quality that attract classical music fans.

But, as I said, there is a danger to success. Now in their sixth summer of picnic operettas, the company at Mixed Precipitation – many of whom have been a part of a number of past productions – has the challenge of keeping the jokes and the interpretation just as fresh as the vegetables. Their take on Henry Purcell‘s King Arthur, mixed with a selection of punk rock hits by Iggy Pop and the Stooges, The Clash, The Sex Pistols, and Patti Smith, is clever and locally relevant, as always. Adapters Scotty Reynolds, Mike Harris, and Marya Hart have transformed the Baroque tale of the battle between King Arthur and the Saxons into a (very) thinly veiled allegory for the public funds used to build the new Vikings stadium and the concerns of underemployed Millenials.

The choice to use punk rock is apt. Pitching British punk against British Baroque draws a smart musical parallel to the conflict between the young and old “Cameloteapolitans”. Vocally, the punk numbers seem to be something of a challenge for several of the more classically-trained performers in the cast, but most of the ensemble manages to produce both a rich tone on the Purcell arias and a good punk-rock snarl when the script calls for it. The trouble is that I wasn’t totally convinced by the Saxons’ anti-establishment outrage: the gang did a great job playing at being punk, but other than the show opener, “Search and Destroy”, they didn’t always manage to pull out all the stops in the way punk rockers should. Some of this sense of hesitancy may be due to the casting of mostly younger actors in the Saxon ensemble, led by the teenage Grant Schumann, a talented performer who needs a little more time to grow into a sense of confident, polished showmanship. 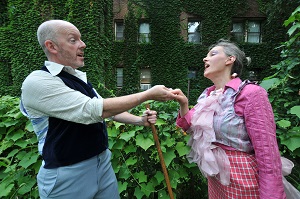 The Purcell portions, however, are all sung well, and since the operetta is in English this year, it is a nice change to be able to focus on Scotty Reynolds’s staging, rather than having to look around for subtitles. We are treated to fun performances by Elizabeth Windnagel and Wric Larson as a pair of air and earth spirits, as well as JP Fitzgibbons doing a fine interpretation of Purcell’s famous “Cold Song”. (Check out this 1982 video of Klaus Nomi singing it; you wouldn’t guess Purcell wrote it in 1684.) Peter Middlecamp is also delightful as the poor “intern” Sir Gawain, and Maggie Lofbloom, as Guinevere, shocked me with her ability to sing while being led through physical therapy. Jim Ahrens is well-cast as King Arthur; his wigs also give a spectacular performance.

None of this would be complete without chef Nick Schneider‘s culinary creations, which are delicious as usual. I won’t give away any surprises, but I particularly enjoyed his interpretations of the swamp and the wedding night feast. (Since these productions rely heavily on donations, the company might consider selling the recipes for $5 after the show. I’d buy them.)

King Arthur is another successful iteration of a theatrical project that works. The ensemble, in a range of perfectly selected costumes by Teresa Mock, is obviously having a great time, and it rubs off on the audience. The show is funny, sung well, delicious, and the right length of time (75 minutes) for a family-friendly show. The scene transitions just aren’t quite as slick as I’ve come to expect from Mixed Precipitation, and the production as a whole feels a bit rough around the edges, with its punk element that doesn’t quite get there. The recipe is delicious; this time around, though, it’s missing just a little bit of something that would make it the perfect dish.

King Arthur: A Picnic Operetta by Henry Purcell, adapted by Scotty Reynolds, Mike Harris, and Marya Hart from the libretto by John Dryden. Presented in community gardens around the Twin Cities, August 14 – September 21 at 4pm. Information at http://mixedprecipitation.org/shows/king-arthur-a-picnic-operetta/.