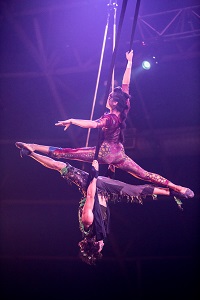 by SOPHIE KERMAN
As a source text for a youth circus production, you can’t get much better than Peter Pan. Neverland is a country of eternal youth and constant adventure, and circus arts rekindle our sense of incredulity in a way that not many other forms of theatre can match. Maybe the death-defying leaps, staggering feats of strength, and boneless contortions become routine for circus regulars; this being my first time seeing Circus Juventas in action, however, I was able to relish all three hours of awe at what these talented athletes can do.

For Circus Juventas’s 20th anniversary, they take us to a world where acrobatic feats are a logical part of the artistic landscape. Of course a pirate crew can climb and contort around hanging silks and ropes, and mermaids can arch their bodies into improbable shapes with slippery ease. While it’s a given that fairies can fly, it also makes perfect sense that the Lost Boys would be able to leap and spring through the forest. And given the political minefield of staging a character like Tiger Lily and her Native American tribe, this production does an admirable job avoiding harmful ethnic stereotypes by creating a fiercely graceful “Fire Clan”.

The Fire Clan of “Neverland”. Photo by Dan Norman.

Neverland is a Cirque du Soleil-style production, with a wide variety of types of acts accompanied by intense and atmospheric instrumental music. There is some plot where it’s needed, but most of the time, the storyline steps out of the way to let each act speak for itself. There is really only one factor that makes Circus Juventas a step down from Cirque du Soleil, and it isn’t the performers’ age. These kids are talented and they work hard in this show, and while there might be a few more errors – and, thankfully, more safety precautions – than Cirque du Soleil, neither of these issues detracts from the thrill of the production in the slightest.

No, what makes this a youth production is the sheer number of performers who need to be given some stage time. The Circus’s summer show is intended to showcase its most advanced performers, and the 60+ kids and teenagers who have been selected (out of hundreds) certainly deserve their chance to shine. However, this leads to some choreographic challenges that smaller professional companies do not have; there are some acts when so much is happening that it is hard to know where to look. At the top of the second half, for instance, there are three entirely different aerial acts going on at the same time. All three are jaw-dropping – that’s not the problem – but I struggled with the nagging feeling that I was going to miss something amazing from one of the acts I wasn’t watching. 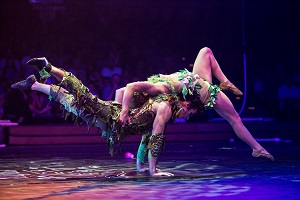 Circus Juventas also has the task of trying to highlight its most accomplished performers without allowing them to steal the spotlight from their peers; they handle this balancing act admirably. Paul Weisman (Peter Pan), Maika Isogawa (Tiger Lily), and Kayleen McQuillan (Tink) particularly stood out for – above and beyond sheer acrobatic skill – their athleticism, fluid grace, and mature sense of how to relate to an audience without the burden of a childlike need to please. But the show wasn’t just about its stars, and it was equally inspiring to watch the supporting cast (who are nothing to sneeze at, to begin with) and speculate about what sorts of leading roles we will see them in next summer.

Though Neverland is a celebration of eternal youth, the nature of Circus Juventas’s educational programming makes it a highly cyclical company. Its performers grow, mature, gain in skill, and then – as many of its leads will this fall – move on to college, where they may or may not continue their circus training. Watching this cast of children is an interesting experience as an adult, with an awareness that for at least some of these performers, their highly-cultivated skills will eventually be lost to jobs, families, and the time-sucking chores of adult life. This may be part of why our viewing experience is such a thrill: like each precarious jump or walk across the high wire, there is something risky and beautifully fleeting about the company’s formidable abilities.

Wendy, John, and Michael Darling need some fairy dust to fly out their window and get to Neverland, but Circus Juventas provides all of the momentum its audience needs for a breathtaking evening. The rest of its run is sold out, though, so unless you’ve got a bit of magic of your own, you’ll have to wait until next summer to experience the Circus’s next cohort of advanced young performers for yourself.